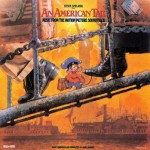 In November of 1986, Don Bluth and Steven Spielberg brought a little mouse named Fievel into the American conscience. An American Tail is a movie that I have seen countless times since my childhood. When we went to the video store, I would frequently select this film.

An American Tail is the story of a family of Russian mice, journeying to America in the late 19th Century. They are seeking a new life free from the persecution of cats. On the boat ride over, Fievel, voiced by Philip Glasser, is separated from his family and lost at sea. He ends up on shore in New York Harbor where he begins his adventure to find his family.

James Horner, the composer responsible for films like Apollo 13, Braveheart, Glory, and Titanic, composed the music for the movie. The songs were composed by James Horner and Barry Mann, with lyrics by Cynthia Weil.

I have made six selections from the soundtrack that I feel are some of the most important tracks on the disc.

The first choice is entitled â€œMain Title.â€ This track features the themes explored throughout the film. Beginning with a soft violin, which will become a centerpiece in the movie, the music builds into what will be Fievelâ€™s theme, and then goes on to include segments from important themes throughout the film, such as â€œSomewhere Out There.â€ It builds on to that with different music that we will hear throughout the movie, a few different themes that cover the feelings that will be shared with characters.

The next selection is titled â€œThere Are No Cats In Americaâ€ and begins with dialog right from the movie. It features different mice telling their stories, and why they are coming to America, and then all the mice, in chorus, joyfully singing that there are no cats in America.

The next song â€œNever Say Neverâ€ teaches Fievel, never to give up hope, to always hope for the best, and to believe in yourself, and your dreams. This song helped you know that Fievel was going to make it, if he didnâ€™t give up hope. Itâ€™s a fun little song, sung by Fievel and a Pigeon voiced by Christopher Plummer (A Beautiful Mind).

â€œSomewhere Out Thereâ€ is a song that became a radio hit sung by Linda Ronstadt and James Ingram. In the movie, Phillip Glasser and Betsy Cathart perform this signature song, which has become a classic in its own right. It is a touching song that sums up the basic premise of the movie and can be used to fit any situation in which two people who care for each other are separated by miles, and long to be near one another once again.

â€œThe Great Fireâ€ is a haunting track that makes you feel that danger is near. It features a little of the main title, played in a lower key, and reveals to the listener that the hero is in danger, and really adds to that feeling while watching the movie.

â€œFlying Away and End Creditsâ€ are both the final track on the disc. Flying Away really gives the listener a sense of the freedom of flight. It includes pieces of the themes used throughout the movie, which sums up the experience. It reminds the viewer of the adventure that they have just been through, and accentuating that with triumphant music, celebrating a long journey that has reached its grand conclusion. The Credits feature snippets of the themes from throughout the movie, bringing back memories of the long adventure, and ends with very soft tones, bringing the story to a soft and subtle close, with a feeling like getting into a nice warm bed after a long, hard day of work.

Those six tracks are complimented by eight others on the album, for an overall fun, enriching, experience. The CD is a good listen not just for the fun songs, but also for the magic that James Hornerâ€™s music contains. It really transports you into the world of Fievel Mousekewitz, and the theme song, â€œSomewhere Out Thereâ€ is a beautiful song that most of us can relate to at one time or another.

I am looking forward to owning this film, and itâ€™s sequel â€œAn American Tail: Fievel Goes West,â€ on DVD sometime soon, and hope that a Special Edition is considered for what is considered by many to be a classic animated film on the level of Disneyâ€™s Beauty and the Beast.

He’s done everything else in the horror/thriller genre. Ghosts Super-Heroes Aliens Mythical Creatures So…..what’s next for M. Night? The answer, of course, is Hippies. Read my review of The Village: http://sweetpaul.com/movies/2004/thevillage.php More from my siteGreat […]

Hey everyone.. I just saw Batman Begins with my awesome friend Jaci. Haven’t seen her in about, oh, a year and some months. I think the last time was at Catholic Central and West Catholic’s […]