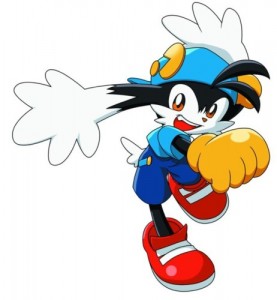 I had never heard of Klonoa before this late last year. When I did hear about it, I wasn’t all that interested in it. But since reading about the game-play mechanics, consider me interested in giving it a shot. This game came out in 1997 on the Sony PlayStation (no wonder I missed it!) and features 2 1/2 dimensional game-play.

Old games being remade for the Wii have tended to be games that were released on other, non-Nintendo, consoles. They also have a tendency to be great games that the developer believes can find a new audience, and perhaps to breathe new life into a property.
This was true for NiGHTS: Journey of Dreams. Though not a remake, it was a sequel to a Sega game that was more than 10 years old. It left me hoping for more. Either NiGHTS 3, or a re-release of NiGHTS Into Dreams.

Klonoa is one of those mystery properties. I’m hoping to learn about what makes this game so great in the future. Hopefully lightning strikes twice, and I’ll find this to be as great a game as I found NiGHTS to be.

Help Klonoa save Phantomile, a land formed by the dreams of its inhabitants, and recently besieged by an unknown evil. KlonoaÃ¢â‚¬â„¢s breathtaking journey takes him through a series of increasingly difficult stages across multiple kingdoms as he strives to save his friends and homeland. Throughout his quest, Klonoa is aided by his friend Hewpoe, a benevolent spirit who resides in the ring from which Klonoa is able to fire his Wind Bullet. The Wind Bullet gives Klonoa the ability to grab and inflate his enemies and use them to his advantage.

With a simple move of the Wii Remote Klonoa can throw captured enemies to break obstacles, uncover hidden items or defeat other enemies. Klonoa can also use any enemy he is holding to perform a double jump which allows him to reach high ledges or jump across large pits. By moving the Nunchuk, Klonoa can use his whirlwind to slowdown approaching enemies. In addition to the Wii Remote and Nunchuk controls, Klonoa offers a wide range of control options for any style of play, including Wii Remote only, Classic Controller and the Nintendo GameCube.