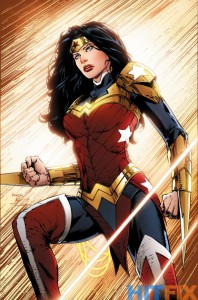 Here we go. Wonder Woman has been through a lot of costumes in the last few years. This summer, beginning inÂ Wonder Woman #41, she’ll be wearing another more modest costume.

She’s way more covered up now than she was with Jim Lee’s New 52 redesign.

A daring new direction begins with the arrival of a brand-new villain! But while he may be new to us, heâ€™s not new to the world he seeks to tame. And speaking of villains, Donna Troyâ€™s quest to destroy Wonder Woman ratchets up another gear (if thatâ€™s even possible!), while the games of the Gods bring dark portents to the ultimate Amazon!