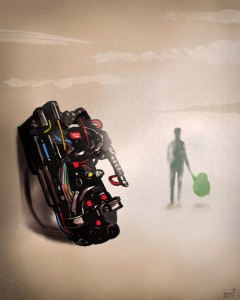 It’s hard for me to put into words what it’s like to lose a member of the family. I think it’s hard for all of us. Last year, I lost three grandparents: my grandma, and my wife’s grandpa, and her grandma from the other side of her family.

Today we lost another person that I find myself having a difficult time coming to terms with. Â Harold Ramis. Â He played Egon Spengler inÂ Ghostbusters andÂ Ghostbusters II. Â And for most of my childhood, he was part of my family. Â While others had heroes in Batman, Superman and Spider-Man, my heroes weren’t really superheroes, but they could do heroic things. Â They were brave when no one else would be. Â They sought to understand what no one else would dare to even try to understand. Â They were the Ghostbusters.

In a pair of movies, and a couple of animated series, the Ghostbusters were a big part of my life, and still are. I’m always as ready as I ever have been forÂ Ghostbusters 3, and hopeful that it still sees the light of day. I anticipate that the script they have will need some re-writes, potentially major ones, too. Â I can see it being a fitting tribute to the one that made it all possible, in memory of Harold Ramis.

I never got to meet him, but it still feels like I’ve lost a member of the family. Â But he will live on. Â He’ll live on in theÂ Ghostbusters films, as they are passed down from generation to generation. Â He’ll live on in the Ghostbusters stories that are still being written, in comic book form and potentially beyond. Â This, to me, is part of his legacy. Â A gift to many of us that have loved his work, who he has never met before. Â It makes life just that much more fun, and I will miss him in whatever future adventures are created. He’s left this world for the next, and I hope to one day meet him there. But until that day comes, here’s to one of theÂ Ghostbusters.