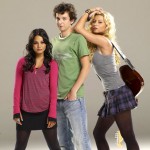 Bandslam released last summer to very little fanfare.Â  In fact, the marketing of the movie was absolutely horrible.Â  Every trailer for it was worse than the last, and the film had been retitled a number of times.Â  For a while it was called Will and then Rock On and then finally Bandslam.Â  The title Will is the most fitting, however, as it really is about his character, and is told from his perspective.

I highly recommend that you get a copy of it.Â  Rent it, buy it, and spread the word to friends that you’ve discovered the best sleeper film of 2009.

You can read my review from when I saw it about nine days in advance of the release date: Bandslam Review

I was quite surprised to see as many features on the disc as there are.Â  And I was very pleased with the assortment of extras.Â  There’s a behind the scenes look at the making of the film with Aly Michalka and Vanessa Hudgens, as well as Deleted Scenes with introductions by the director.Â  There is also an Audio Commentary featuring the Director, Aly Michalka, Vanessa Hudgens and a very late arrival by Gaelan Connell.Â  Rounding out the extras are a pair of music videos.

I would have liked to see a few more behind the scenes features, and perhaps a mini-documentary on CBGB’s, but I’m pleased that this release actually had features.Â  Something that City of Ember was sorely missing.

I would have also appreciated a Blu-ray release, but with good sales for this movie, I could see that happening at some point in the future.

In the meantime, pick up a copy.Â  You won’t be disappointed.

Revenge of the Sith Review

Star Wars was AWESOME! Granted, yes, there were cheesy parts.. but overall, this had such dark parts in it, it was incredible. There were also some really tragic elements that were very artfully done, and […]