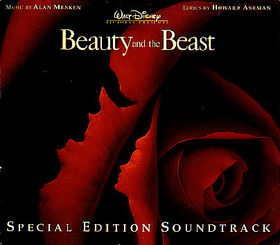 Every once in a while we like to try new things in order to see what you, the reader, enjoys. Here is the first “toonbox,” which will consist of soundtracks from animated films. Enjoy!

In 1991, Walt Disney Pictures released a film that to this day, remains one of the greatest animated films of all time. Beauty and the Beast was released to a very warm reception, receiving a nomination for Best Picture at the Academy Awards. It has since, become my favorite animated Disney film of all time. I am especially excited for the upcoming DVD release, this fall.

Upon purchasing the Special Edition Soundtrack, I was very excited. I had taken in a screening of the film at our local IMAX, and was pumped up. This discâ€™s packaging immediately lets you know that it is a labor of love, with itâ€™s high quality design that gives the disc an heir of nobility. Upon sliding the slip-cover off of the jewel-case, you are treated to a montage of some of the most memorable moments from the movie.

The insert includes a foreword by Academy Award winning composer Alan Menken. He dedicates the album to the memory of Howard Ashman, who wrote the lyrics for this soundtrack.

The album has nineteen tracks including music not included in the film, such as the original early version of â€œDeath of the Beastâ€ and the â€œwork tape and demoâ€ of â€œBeauty and the Beast.â€ It also includes the demo of â€œBe Our Guestâ€ which is made interesting by the fact that it was originally sung to Belleâ€™s father when he came to the castle.

In the film, the music moves the story forward, explaining the relationships and desires of all of the characters in a few minutes. The story is propelled forward from the opening scene, that draws you in, with the story of the Beast. The songs are all instantly memorable.

The opening song â€œBelleâ€ shows how the townsfolk view Belle, Gastonâ€™s plans for Belle, and how Belle sees the world.

â€œBe Our Guestâ€ is a fun escape song with some classic Disney animation style.

â€œBeauty and the Beastâ€ is a song that, when I heard it, I thought that the song was a classic song from years and years ago. For all I knew, it was written in the nineteenth century, and they used it in the movie. It had become a hit on the radio version sung by unknown Celine Dion.

â€œHuman Againâ€ is a song that was originally a part of the film, but was dropped for length issues. It became a hit when the film was translated to Broadway. Folks at Disney were planning to release it on IMAX and decided to put the song back in. They brought the original animators back on board, and finished the scene. This song is not a favorite of mine, but after about eleven years without it in the movie, it throws me off. The movie had a sentimental feeling for me, and the new scene takes me out of the familiar elements that I have seen for years. On the soundtrack, itâ€™s nice to have, but the only words that run though my mind if the song is in my head are â€œhuman againâ€ whereas with others, I know them by heart.

The score is one of my favorite parts of the movie. It is absolutely incredible and perfect for setting the tones of the movie. The opening scene has a magical quality because of the music; Beastâ€™s entrance is heightened with dark deep tones that suggest menace, and that Beast is to be feared. The film is very thematic in many ways, with the music setting the tone and feeling of the scene. It guides the emotions of the listener, and you know get the feeling of just what is happening, based on the music. This is one of the most beautiful scores that I have ever heard, and is easily up there with James Horner and John Williams.

To this day, this soundtrack stands as one of the finest Disney soundtracks around. The inclusion of the original recordings of a few of the songs give this CD a fine quality for collectors and shows how much heart went into the project. Itâ€™s this kind of care that provides the listener with good reason as to why it won the Academy Award. I suggest that when you go out and purchase the DVD, swing by the Soundtracks, and pick up the Beauty and the Beast: Special Edition Soundtrack!

Since the first episode of Heroes, I have wanted to own a recording of the score by Wendy & Lisa.  Wendy Melvoin and Lisa Coleman have composed a unique experience with the score, that sets […]