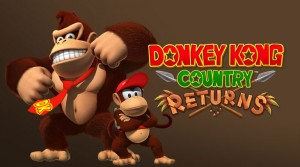 A couple of years ago I wrote an article called “Donkey Kong Country Trilogy, My Dream Game” never thinking that it would actually happen.Â  Nor that a true sequel would actually happen.Â  But this week I have been given an amazing gift from Nintendo.Â  They announced a new DKC game at E3!Â  This wasn’t the only game that surprised me at this E3 and I’ll be writing my response to a bunch of the games that Nintendo announced like I did last year.

This game, however, is enough for me to feel that Nintendo has won this years E3 Expo.Â  I know that this is a selfish reason, though.Â  I’m completely pumped about the game and look forward to jumping back into the DKC world when the game comes out this fall.Â  The original is my all time favorite video game, and I loved the sequels as well.Â  I just never dreamed that I would see another one so soon.

Controlled by a group of evil Tikis, the animals in Donkey Kong Island have raided Donkey Kong’s Banana Hoard and stolen his stash of bananas – and he understandably wants them back. Retro Studios brings Donkey Kongâ„¢ back in a new side-scrolling adventure with familiar characters and new levels that reignite the passion players had for the Super NESâ„¢ original.

I’ve been following whatever news I can about Oswald the Lucky Rabbit since the character was brought back to Disney for the first time since Walt Disney lost the character. You see, before Mickey Mouse […]