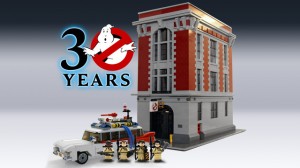 This is something that I’ve been hoping for, ever since discovering Lego Cuusoo many years ago. Â I never actually thought it would happen, though. Â There were many Ghostbusters projects on the site, mostly featuring Ecto-1 and the team, but in March of 2013, a new one was launched that changed everything. Â This one looked great, and a lot of Ghostbuster fan sites were spreading the word about it.

A few days ago, Lego Cuusoo announced their decision regarding the project. Â It is moving forward. Â It’s going to be produced. Â My guess is that it’ll be available later this summer. Â Last year’s release, a Lego Back to the Future DeLorean, was released first at the San Diego Comic Con, followed by a general release on August 1.

No release date has been set for the Lego Ghostbusters set, however. Â It does not include the firehouse, but who knows? Â If the Ecto-1 sells really well, perhaps the firehouse will be a future set.

Now all we need is a Lego Ghostbusters: The Video Game!

IDW Publishing announced this week that the end has come for theÂ Ghostbusters comic book that has delivered excellent content for the better part of three years. I’m very proud of the team that created it. […]

How to make a true Ghostbusters sequel

Paul Feig is working on a reboot ofÂ Ghostbusters and there are other films also in the works that may or may not be connected to the original two films. Feig has said that he could […]