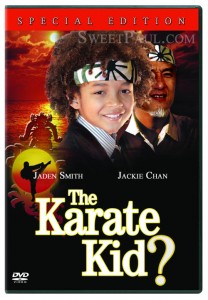 So, not only are they destroying the classic film The Karate Kid by making a remake of the original.  They’re also ruining the character of Mr. Miyagi with the casting of Jackie Chan in the iconic role. In a move that I am sure the executives believe is the best choice worth celebrating, they’ve picked someone that is not right for the tone that Miyagi set.

For those of you that don’t know, Will Smith’s son, Jaden Smith is in the leading role of Daniel Larusso.  However, the name will likely be changed as Larusso was Italian. The character has also been dropped from high school to middle school, making any amount of story from the original movie nil.  An article at Variety said that it “will borrow elements of the original plot, wherein a bullied youth learns to stand up for himself with the help of an eccentric mentor.”

But that’s not all. The film has a director attached: Harald Zwart. The director of Agent Cody Banks.

The fact that they’re doing this movie is a travesty. That they’re calling it The Karate Kid at all is wrong.

It’s not at all what a new Karate Kid movie should be.

The best thing that could happen for the film would be to have Ralph Macchio play the role of Daniel Larusso again, and have him in the role of teacher, with Jaden Smith as the new Karate Kid.

They could call it The Karate Kid Part V. Or Part IV, because The Next Karate Kid doesn’t really count. Seriously. Two Words: Bowling monks.

But alas, contracts are either signed, or being signed, and the film will be produced. The one thing that could happen, which I think should happen, is a name change. It happens often in film making. Call it The Kung Fu Kid. Call it The Tae Kwon Do Kid. Call it anything but The Karate Kid.

It’ll never be the same, and can never be. The music just isn’t going to be good enough.

How to make a true Karate Kid sequel

A few years ago, Sony Pictures made a movie that I’ve never seen. They called itÂ The Karate Kid even though it is set in China, where Kung Fu is the martial art most studied. Moreover, […]

Disney Remaking Flight of the Navigator!

Wow… this is something that I actually saw coming at some point in the near future, and it’s one that I’m actually happy about. I was a pretty big fan of the original version of the […]