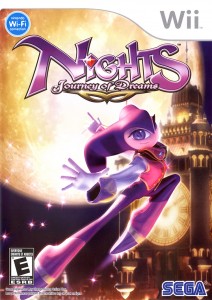 The critically-acclaimed franchise that gave gamers the freedom to fly in a world of dreams is coming to the Wii this Holiday! As a fantasy jester called NiGHTS, players will experience a heightened sense of gliding, spiraling, looping, and much more thanks to the innovative Wii Remote.

Nights is a Journey of Dreams

I was skeptical of this game at first, but had heard all of the acclaim around the original game that was released for Sega Saturn many years ago. I wanted to be convinced, though, and after reading about the game in Nintendo Power magazine, I was intrigued.

I bought the game, and the first thing I noticed when starting the game was the great graphics and the music that belongs on a soundtrack album.

Then I started to run around the games’ gateway of dreams, getting a handle on the controls, which were incredibly simple to master. I then took to the skies for flight training. They give you the option of either leading with the Wii Remote, by pointing at the screen, or using the Nunchuck’s control stick. The control stick is the only way to fly.

Flight in this game is incredible and exhilirating. It’s not completely free, as the game lets you move on a 2D plane, kind of like being on tracks. That is a blessing, however, as going through the levels would be pretty difficult if you could go anywhere.

Getting better at flying takes time, so don’t get discouraged if you’re not that good at it when you first start playing. My first time through some levels, I was running into walls and things that I really shouldn’t have been. I kept going, though, and while I’m still not the best, I’ve been able to blast through some stages without much trouble at all.

Speaking of the levels, they are diverse and fun. Some, you are Nights, and you have different time limits and goals that must be accomplished, and others you are either the boy or the girl, who each have different missions to accomplish. (And finishing the game with both of them gives you a different ending.)

The end bosses are varied as well, with different techniques used to defeat each of them. The very first one I fought was kind of like a big pinball game, where the boss was the pinball and I was throwing him through it. That one was difficult to get used to, as the level switches from a vertical plane to a horizontal one, just for that.

While the game is a little short, that is sort of a blessing, as some of the levels are huge and would take a long time to learn. I constantly go back through old levels, though. I can always get better at the game, and it’s really fun to re-play.

Level design is truly inspired, as there are many various level types and game play styles.

It makes me wish they’d either create a sequel, or update the original Sega Saturn game for Wii.

Nintendo’s Next Console is Codenamed ‘NX’; And they’re going Mobile

Nintendo announced today that they’re teaming up with a company called DeNA to bring their characters to mobile platforms. It’s going to be huge for the company, as their characters are well loved and the […]