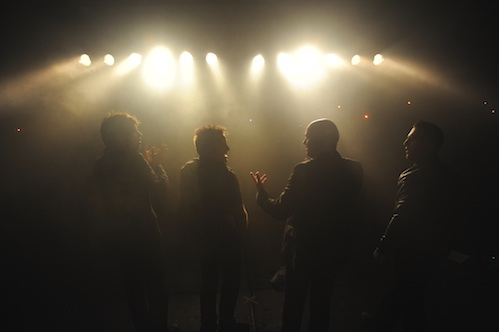 Great news, Newsboys fans: Longtime guitarist Jody Davis has returned to the Newsboys after a five-year hiatus. He left the band to spend time with his daughter, and is now making a return.

This comes on the heels of Paul Colman’s announcement that he is returning to his solo music career. And we’ve just about come full circle. All we need now is to see an announcement of the return of Phil Joel to the band. But that’s not something that is bound to happen any time soon, as far as I know.

Newsboys also have a new album dropping this spring. The first single from it is classic Newsboys, and that gives me hope for another incredible record!

(NASHVILLE, Tenn.) Jan. 5, 2009 – Guitarist Jody Davis returns to newsboys after a five-year hiatus. Davis, who was a member of the band from 1993-2003, contributed to many of newsboys’ greatest hits like “Shine,” “Entertaining Angels,” and “It is You.” In 2003, he took time off to care for his daughter, Bethany, who has cerebral palsy.

“I am thrilled to be returning to the band and back with my bandmates, who are some of my best friends,” says Davis. “This is a big change in my life, and I’m looking forward to the tour and new record with excitement.”

Peter Furler, lead vocalist for newsboys, is also excited about Davis’ return. “Jody is like a brother to all of us, and we have missed him greatly over the last five years. It’s going to be great to have him back with us.”

Paul Colman, who played guitar with newsboys the last three years, will be continuing his solo career and performing shows nationwide in 2009. “My three years with newsboys were among the best of my life. I learned an immeasurable amount about music, ministry, and life, and am happy to say I left with all our friendships wonderfully intact. I always was and always will be one of newsboys’ biggest fans. I am very excited about the return of Jody Davis!”

newsboys will release the title track and debut single, “In The Hands Of God,” from its forthcoming May 5, 2009 project to both AC and CHR radio Jan. 16. The band will also embark on a 30-city “Join the Tribe” tour with special guests DecembeRadio, Vota, and Bread of Stone in February. Additional tour details are forthcoming.