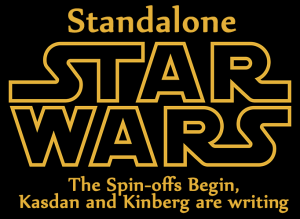 Today, there was official confirmation from the head of Disney Bob Iger, that there will be spin-off films in the Star Wars cinematic universe.Â  What does this mean?Â  Well, what we previously thought may not be true (that remains to be seen, with this news).Â  We thought that Lawrence Kasdan and Simon Kinberg were going to be the screenwriters on Episodes VIII and IX, and that might still be true, as no writers have been announced at this time for those films.Â  They will be consulting on those films, as they are on Episode VII currently.Â  However, they will be pretty busy developing their own screenplays following individual characters in the Star Wars universe.

Here’s the official announcement from Lucasfilm, followed by some of my own thoughts on this new development.

Lucasfilm is officially announcing new spinoff films that will expand the mythos and depths of the Star Wars universe in previously unexplored ways.

One of the stand-alone films will be written by Lawrence Kasdan, screenwriter of The Empire Strikes Back, Raiders of the Lost Ark, and co-writer of Return of the Jedi while the other will be penned by Simon Kinberg, writer of Sherlock Holmes and Mr. and Mrs. Smith. The movies will be separate from the upcoming Episodes VII, VIII, and IX, on which Kasdan and Kinberg are also consulting, and are expected to be released sometime after Episode VII. Each standalone film will focus on a specific character, and two spinoff films are currently confirmed.

In a call to investors, Bob Iger, chairman and CEO of The Walt Disney Company, revealed while the original focus was on the highly-anticipated sequel trilogy, the idea of spinoff films was bandied about early and the additional films are now becoming a reality. “We are in development of a few standalone films,” he said, “that are not part of the Star Wars saga…there are now creative entities working on developing scripts for what would be those standalone films.”

Wow.Â  With J.J. Abrams directing Star Wars: Episode VII, and these new Star Wars spin-offs coming from some great writers, we’ve got a lot to look forward to.Â  Seriously, after six live-action Star Wars films, and an animated Clone Wars film, we’re getting no less than five more live-actionÂ Star Wars films, starting in 2015 with Episode VII.Â  According to Bob Iger, the plan is for the new trilogy to be released every two years.Â  This leaves room in the off years for one of the standalone films to be released.Â  That would mean that from 2015 to 2019 there would be a new Star Wars film on the big screen, each year.Â  Another possibility is that there could be a couple of Star Wars film released in the same year.

I think it’s reminiscent of the Marvel projects they have going on. The Avengers is really the main trilogy, with all of the individual films supporting that trilogy, while also being singular stories that may or may not have an impact on the overall story.Â  That said, it’s very possible that these standalone films will have nothing to do with the new primary trilogy.

Rumors so far include films that follow Yoda, Han Solo and Boba Fett.Â  Some of my favorite ideas that my friends had are Knights of the Old Republic and a stand-alone film documenting the success of Figrin D’an and the Modal Nodes.

Honestly, I have no idea how this is going to go.Â  The Ewok Adventure and The Battle for Endor were television cinematic gold, and I’m not sure that these films will be able to live up to the legacy of those two epics.Â  We’ll have to wait and see what they’re going to be like.Â  My head is spinning with thoughts, including what the music will be like, the start of the movie, how the titles will work, what the movies will even be called, and I can’t wait to see it.

Why J.J. Abrams is the Right Choice for Directing Star Wars: Episode VII

J.J. Abrams has a very good understanding of what made the very first Star Wars film, A New Hope, work.Â  Right from the start, that film had mystery after mystery, and took you on a […]