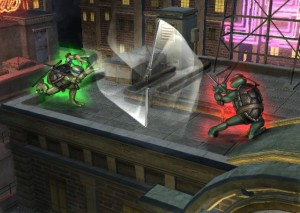 Ubisoft has announced a Teenage Mutant Ninja Turtles game for Wii, to be released later this year. The creative team developing it is called Game Arts, who had a hand in preliminary development on Super Smash Brothers Brawl. That is great news, as far as the Ninja Turtles are concerned. Smash Brothers is one of the greatest games ever released on any console, period, and to have this team on the Turtles property speaks volumes for the game.

There are also former members of Team Ninja working on the game as well. They worked on the Ninja Gaiden and Dead or Alive series.

Of course, this is overly optimistic, but I’m really intrigued by the promise of it. I really enjoyed the TMNT game that is currently available, regardless of the repetitive fighting. I felt that it actually captured the Turtles and their abilities very well. I also found it to be a very similar game to the old NES sequels, though in 3-D.

The game will feature many modes of play, including Story, Battle Royale, Tournament, and Winner/Loser Stays On. There will also be unlockable characters and stages, much like Smash Brothers. Fighting arenas will be interactive and each character will be highlighted with a glowing effect for ease of use.

Tentatively titled TMNT: Smash Up, the game will likely be released in September.

Since last fall’s purchase of the Teenage Mutant Ninja Turtles rights by Paramount, the future of the film series has been in the air.Â  Now we have some idea of where it is going, just […]