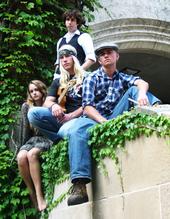 A friend of mine named Rob Antecki is in a band called The Backstrokes. He asked that we all share this if we wanted to. I figured I would.

To the friends and fans of The Backstrokes:

We are happy to announce the release of our debut E.P., “Things to Come.” We have included five songs on this release: “Reflections,” “Haunted Landscape,” “Broken Bicycles,”Â “To Alina,” and “The Secret.”

For those of you who have been following us, you know that this recording represents a very large investment of time, work, finances, and emotional involvement. With this in mind, we would like to ask you for a favor.

Right now, we are at the ground level of our work together. Everything we have done, we have done on our own and with the generous help of family, friends, and acquaintances who believe in our music. We do not have the luxury of major label (or ANY label) support. This means we are fully responsible for recording and promoting our material.

If you like our music, support our material, ideas (detailed below), and plans for the future, I ask you to please spread the word about us. The best advertising you can give us is to tell your friends, for them to tell their friends, and so on. This favor will only take seconds of your time but would mean the world to us. Almost as important, we encourage you to purchase a copy of our E.P., for which we have provided a convenient and secure link. These will also be available at our concerts. We think $5.00 is a reasonable price for your own convenient, CD quality copy with liner notes. Therefore, please pass our music around to friends and spread the word, but also encourage them to purchase the E.P. if they like it and listen to it. We have many plans for the future, which include a debut album, releasing our work on vinyl, concerts, music videos, and short films. All of us are in school and work, so our time and financial resources are very limited. Anyone seriously involved in music understands how expensive studio time, equipment, CD pressing, and promotions are. Any support you can give us is very much appreciated.

With this said, we would now like to introduce some general principles which guide us in our work.

1) Despite the popularity and ubiquity of MP3Ã¢â‚¬â„¢s and other forms of low quality digital music, including streaming audio and video, we believe that people still have the ability to discern and appreciate high quality recorded music. In view of this, we fully support the widespread return to vinyl records for serious music listening. For digital music, we support FLAC and other lossless compression formats which preserve the original, CD quality audio file. While there will always be a place for CD’s, we hope that in the future the most common method of music distribution will include a vinyl record with a coupon for a free lossless digital download.

We are aware of the heated debate concerning analog versus digital music. This is something we will address later in a technical paper. Suffice for now, we will leave you with this thought: It is simply not possible for digital quantization at any level to compete with something which preserves an infinitely smooth waveform. In this respect, there is no debate. At extremely high levels of quantization and sampling, the debate shifts to whether or not it is possible for the human ear to distinguish the difference between analog and digital music. For just one example, hair follicles in the inner ear are known to be able to sense movement as small as the width of a hydrogen atom. With this said, we believe the answer is obvious. Finally, it also becomes a question of the purpose of recorded music altogether. Is the purpose convenience, or is the purpose to offer as real and as powerful an experience as possible outside of a good live performance? I can’t imagine that it was ever anything other than the latter. Why make a recording of music at all if the purpose is simply convenience, and not a superior experience?

Additionally, vinyl records offer far greater capacity for physical, tactile artwork and information to compliment the music. Finally, the greater care and patience involved in selecting a vinyl record, adjusting a personal turntable, and sitting and listening to the music are activities reflective of more thoughtful listening behavior. One which moves music away from an existence as background noise against which we carry out our daily activities and fosters the qualities of patience, discernment, and subtlety. It is true that almost everything in life can be reduced to that which will have the widest appeal and greatest convenience, but at what some point we will lose sight of the entire purpose of an activity or phenomena in the first place, not only in superior quality but in meaning. Yes, vinyl records are more fragile and sensitive than other media, and require a quality turntable and speakers, but caring deeply for something like music means investing your time and effort into it. Similar arguments can be made for other stalwarts of art and information, such as physical books, newspapers, paintings, and so on.

Since any form of recorded music is only an approximation of live music, even if vinyl offered no advantage in faithful sound reproduction, we feel most people would prefer the warmer and richer sound quality they produce. We are not in any way maligning artists who record solely in digital or the concept of digital music itself. High quality digital studio recording techniques are as much an art form as vinyl record mastering, and with the advent of higher bit and sampling rates, can offer extremely faithful music reproduction.

In summary, digital and analog music can and should thrive side by side, each complimenting the other with its advantages. However, at the current time analog music is far behind in practice. We are pleased to sense a resurgence in its popularity and will do all we can to cultivate its growth.

2) Music can serve two main purposes. One is to provide entertainment and the other is to proffer a serious artistic statement. These two purposes have coexisted since time immemorial. However, we feel that popular music has much more capacity for the latter than that currently displayed by most Ã¢â‚¬Å“mainstreamÃ¢â‚¬Â artists. To be succinct, we feel that mainstream music could and should serve the deeper purpose of uplifting society and making serious insights into the human experience, in addition to providing a positive entertainment experience and welcome relief from day to day reality.

3) Many feel that music is one of the most powerful artistic mediums that exists. In our modern times, we know that film can also prove highly moving. Thus, it would seem natural to assume that the combination of the two would result in a new art form with unprecedented capacity to engage the human mind and spirit. That is, the music video. Unfortunately it seems that most mainstream examples in the genre seek to appeal to the most base of human instincts while offering little in substance and originality. ***

4) Originality, in style and substance, should be a prime consideration in any creative attempt. There is no point in doing something which has already been done.

5) While it appears that a small handful of powerful forces, which shall not be named here, have a chokehold on the music industry and on popular tastes, we feel it is still not to late to change what is considered Ã¢â‚¬Å“mainstreamÃ¢â‚¬Â and introduce original ideas into the wide public sphere through these same and alternative channels. This requires strong grass roots efforts along with concerted and widespread person to person communication.

6) We feel musicians and groups have a responsibility for stewardship of their influence and resources. Music is one of the most powerful social forces throughout our modern civilization. Those who achieve the highest levels of renown in the field have been given a unique and rare opportunity to make a positive impact on the world both through their personal behavior and financial resources. A tremendous amount of change would be possible if those in this position would humbly turn their efforts to positive ethical and moral endeavors.

7) Thanks to the advent of technology and resources like myspace, facebook, online music sharing networks, and more accessible recording and audio equipment, it is easier than ever before for independent artists to reach the public. There is no doubt this is a positive development.

However, major record labels still represent the most powerful tool for the discovery, development, and promotion of new artists, especially in a way that allows them to devote their full time and energy to music. Their wide range of resources, which includes long established media channels, access to the highest quality recording studios, musicians, engineers, and pressing facilities, can be used as a positive or negative force. As it currently stands, it seems predominantly inclined to have a negative influence on music. Specific examples include unfair artist contracts, refusal to transform the stagnant mainstream radio sound, overpriced records, and a seemingly endless stream of trendy and short lived, underdeveloped groups which the public burns through at an ever increasing rate. On the contrary, used in a positive way, working together with artists and the public, their resources and influence have the ability to usher in the advent of a major change in popular music which would include development of more original artists, greater diversity in mainstream sound, fair music pricing, and new mediums of music distribution including the substantial return of vinyl records.

The only way those in power will realize the above is by the widespread support, in record sales, concerts, promotion, and radio play, of independent artists, even to a much larger extent than occurs today. As this continues to eat away at major label and radio conglomerate control of the popular music industry, perhaps they will see that a major revolution is needed. One which will ultimately benefit everyone involved.

If you agree with these principles, please join us in helping to disseminate them. Feel copy these idea into your notes and blogs on facebook, myspace, and the like, provided that proper credit is given.

Here are the lyrics, so far, of a song by Mark Schultz that he performs live, but hasn’t yet finished writing. It’s supposed to be on his next album. I can’t wait to hear the […]