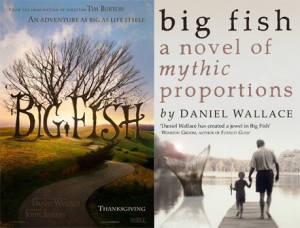 This is probably the first in a series of articles on the times that a movie has either been as good as the book, acted as a great complement to the book, or bested the book. This is the result of being tired of hearing the misconception that “the book is always better.” The truth is, it’s not. Sometimes the movie far exceeds the book in execution of the same story.

When I do my comparative analysis, I’m going to let you know whether I’ve read the book that the film is based on, and whether I read it before or after seeing the film, as all of these things have an effect on the results.

Some of the books/movies I plan on covering include Big Fish, The Lord of the Rings, Harry Potter, The Shawshank Redemption, The Princess Bride, The Neverending Story and perhaps a few others.

We’ll start with the lesser known of the adaptations.

I saw this movie the day it was released in 2003. Needless to say, I totally loved it. It’s a great film with so many wonderful sets and characters that my imagination was very entertained. I mean, the movie has it all. From scary moments, to adventure, to love, to sacrifice, to mystery and hi-jinks. I could go on.

This is a movie that made me want to spend more time in the world that I discovered through the lens of Tim Burton.

I had heard that it was based on the book by Daniel Wallace, so I soon ordered it, and plunged myself into that world on the page. I found that there were many things that were different, which is not uncommon and could be expected. However, there was one major plot point that the movie had right, but the book had horrible wrong.

In the film, Edward Bloom is a fun-loving and dynamic character. He is completely selfless and wants what is best for everyone. Even when winning the girl of his dreams, he quips “she doesn’t belong to anyone” to her then-fiance. He helps a giant find a future in a circus, and he helps a small town to be revitalized. The character is also so very madly in love with his wife, that when temptation comes along, he turns it down.

That’s what the book gets wrong. In the book, Edward Bloom goes way out of character and has an affair. Sure, you could argue that makes him more human, with real flaws, but that’s not the point of the story. The point is that Edward Bloom has larger-than-life stories that make him a unique sort of superhero. The book, in one chapter, cheapens the character from someone that is infinitely more likable, making him into just another guy that happens to tell great stories.

A character like Edward Bloom, that tried so hard to win the heart of the girl of his dreams would not, ever, throw his love for her out for a night with another woman. He’s just not that guy.

Thank you, Tim Burton and writer John August, for recognizing this and saving the movie from falling short of greatness. And thank you Danny Elfman for the amazingly varied and tour-de-force of a musical score that accentuates the story so well. The music written for this film is majestic and uplifting, and I consider it to be Danny Elfman’s magnum opus.

This is a case where the movie is definitely better than the book.

I’m not sure what I’ll write about next, but I will continue this series with another title to itself.

Properties that Should Be Movies: M.A.S.K. and Dino-Riders

I’m going to start writing a bit about some of my favorite properties when I was young, that I think would make excellent films. Especially if the properties are handled correctly. Now, some of us […]

Song: This Man by Jeremy Camp || Lord of the Rings

A song today… it’s been a while since I’ve posted lyrics, and after a long long long post, I think it’s time for a short one. This song, although simple, is very deep at the […]