Here’s the story of my proposal, told in two very distinct stories.Â  I hope that you enjoy it! 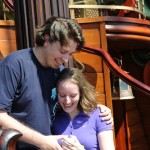 At long last, the story that Iâ€™ve been waiting so long to reveal to the world.Â  Here is a very special Narnia story, that happened last fall, as described by publicist Ernie Malik.

What is it like to fall in love in Narnia?

A curious question you may think. We bring it up here, while cruising along on our third voyage through this wondrous world created by C.S. Lewis, because the wonder of love did happenâ€¦to six couples who worked on both the first and second film adaptations.

And that’s not the only account of the story…

Courtney Addicott didn’t have a clue.

She thought she was merely tagging along with her boyfriend of four years, Paul Martin, when he visited the movie set of “The Chronicles of Narnia: The Voyage of the Dawn Treader” in September. They were given a tour of the titular boat, situated on the end of a pier on Australia’s Gold Coast, at Cleveland Point in Brisbane.

Addicott thought Martin’s hands were shaking because he was among famous actors and filmmakers, nervous about interviewing them for his Web site, Narniafans.com. She thought it strange that a photographer seemed to be stalking them, but she didn’t say anything.

Paul runs a “Chronicles of Narnia” fan website and proposed to Courtney on the set of the next movie in Australia.She soon knew why: In front of the beautifully constructed helm of the Dawn Treader, Martin got down on one knee, pulled out a diamond ring and proposed. Her answer? Yes. Of course.

Read the rest at mlive.com!

And here’s the third location.Â  And interview on WOOT.COM!!!

The Chronicles of Narnia, Superman Returns, Fantasia and more to release on Sony’s Blu-Ray Disc format read more | digg story More from my siteDisney’s Ultimate Plan: The road to Muppet Babies on DVD and […]

“Ben told everyone that he had been offered a three-film deal to play Caspian. It’s the chance of a lifetime, but the National are furious at him for leaving them in the lurch and are […]