I’ve gone through all the people. Was that ever hard! Thanks to all those that took part and best of luck to you! I’m officially done with this! Wooooo! No more.

Here’s the corresponding questions for the answers below:

1. You’ve got an awesome taste in movies and stuff.. Rock on!
2. Definitely Lord of the Rings, whenever I look at my Trilogy Tuesday pass!
3. Wow… um.. HI! lol… I don’t know if I can think of anything that would.
4. That’s tough, because I’ve had limited times when I’ve met you, and all of them I’ve been impressed with your eagerness to learn and just how courteous you are with everyone.
5. Toughy… probably an owl though because you seem rather intelligent.
6. Are you planning on writing a book at some point?

1. You’re a great friend, with awesome morals, and even though you don’t know where you want to go as far as a career, you’re not afraid to try things out until you get there.
2. Anything by the Beatles. Take pride in that!
3. You’re Average hating. haha
4. When I told you about the Eucharist in Rick’s basement.
5. Some type of Marsupial, I think.. I don’t know, I don’t even know what a Marsupial is at the moment.
6. Why do you have to eat all the time, really?

1. You’re a basketball star, a movie queen, and an all around nice girl.
2. I’m going to have to say, any movie that I go to at Celebration, because I’m like “Jenny works here!”
3. I dunno, that’s a good question, maybe you’ll have something when YOU do this for ME! HAHAHAH
4. First time I met you at Antioch in Caledonia, I seem to remember just thinking “oh, she’s another Richards, probably as nice as they are, too! Awesome!”
5. A basketball playin’ rabbit or something. Because you’re fast and stuff. I got nothin’
6. What is it that makes Jenny Richards tick?

1. You’re an awesome friend, a person of character and logically grounded but illogically random at times.
2. Probably Garden State at the moment, but also when I listen to my Ipod, I think “Courtney probably has this song, too!”
3. “Do you know what [insert name here]’s going on about?”
4. Wow, this is a hard one. I can’t seem to remember any specific time. I just remember that over time we just started talking more and more.
5. A Dragon! I don’t think it’s based on looks or anything, but I am reminded of them. Maybe it’s your old screen name or something like it.
(Here’s the picture I tried to put in my comment but didn’t show up, and yes, I did draw that:) 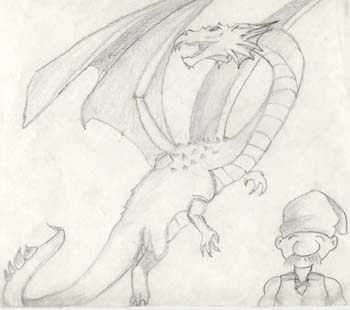 6. Where did the fascination with Tim Burton’s crazy ideas and things come from?

1. You are a crazy ninja, an intelligent person and a fun member of a retreat team.
2. Everybody was Kung-Fu Fighting or RealUltimatePower’s theme music.
3. Is there anything that would make sense ONLY to you and me?
4. When you ran into Antioch and were louder than I am. Wow, I thought, she’s louder than I am.
5. A lion.. or a bear.. I don’t know, maybe a WALKING STICK BUG, because they can disappear into trees like ninjas.
6. What is so fascinating about Ninjas? Is it because of Samurai Jack?

1. You’re a silly goose, a caring person and a good listener.
2. I don’t know if I can answer this one.. it’s not that there aren’t any, it’s that I haven’t found it yet. Darn!
3. oh boy, there she is… umm… you’re insane.
4. Sliding down the snowy streets during caroling.
5. A mouse I think.. don’t ask me why, but that’s the answer.
6. Are you enjoying your time at Subway? (and is it really fresh stuff that they use?)

1. You’ve always impressed me with your confidence in your singing abilities, which are excellent. And you’ve got very clear eyes that are very emotive.
2. Robin Hood: Men in Tights. “Oh Lord, if I could have but my one true love…”
3. Presenting PAGES: The MUSICAL… a new musical comedy based on the hit songs “That doesn’t go there!” and “Get back to work!”
4. Definitely working in the A/V rooms for hours and hours and the utter boredom that followed when one of us wasn’t in the room.
5. A turtle.. no.. a dove.. no a turtle dove. What’s a turtle dove and why did I pick that? The world may never know.
6. Why, after all these years, do you still work at the library? Nevermind…I worked there for at least as long as you have. How about this one: What is your all time favorite memory of when we worked together at the library and do you remember the specifics?

1. You’re an amazing woman of God, an inspiration to your friends, and stronger than you realize.
2. Anything from Steubenville… (amen…Amen…AMEN!)
3. This is my wife.
4. At Steubenville, when you were talking to Doug about the infinite love of God.
5. This is a tough one, but I’m going to have to say a puppy or a bunny.
6. What is it that makes Jaci Mae so very cool?

1. You’re a punk-rawk princess with a fun taste in music I’ve never heard of and a style like no other, except for most of the people at Blues on the Mall in Grand Rapids every summer. 😀
2. Anything by Green Day. But also The Hives.. I don’t know why, because I couldn’t name a song of theirs if I wanted to..
3. I don’t trust you either. (Regarding the tickling)
4. When I first talked to you for a few hours at Rick’s. I’m not sure of the order of events but that was the first time I got to know you very well and I was like “dang, she’s pretty cool.”
5. A cat. I don’t know why.. but something like…. hello kitty…
6. How did you learn to do all those awesome things with your hair? Would you punk rock out my hair? lol

1. You are a cross-dressing (King Arthur) crazy person with a crazy way of watching stuff like Pocahontas and Mulan when there’s stuff like Beauty and the Beast to be watched.
2. Pocahontas now. geez.
3. *Makes a face*
4. When you were on the retreat and I started to make faces at you, and you laughed at them and then started making faces back.
5. Some kinda bird thing. I never promised that these answers would be normal-ish.
6. Do you play World of Warcraft often?

1. You’re a smooth operator, a Hermione lookalike and a Child of God. Put them together and you’ve almost got a weird 90s hybrid of the 80s.
2. Harry Potter and the Half-Sorcerer’s Goblet of Azkaban’s Chamber of the Pheonix
3. Random! um.. this one’s hard 🙁
4. When I first met you and you looked like Hermione and one of the first things I learned about you was “YOU LOVE HARRY POTTER AND ARE GOING TO THE PREMIERE IN NEW YORK!”
5. I’m going to say a Koala Bear. I don’t know why, maybe it’s because of a cartoon that I used to watch that had Koala’s in it.
6. How do you keep your hair so curly and nice?

Saw Harry Potter and the Prizoner of Azkaban on Friday morning at 12:01am. It was really good. I wasn’t really surprised by that, I thought it would be. I saw it with a great group […]

Praise You in this Storm Casting Crowns I was sure by now God, You would have reached down and wiped our tears away, stepped in and saved the day. But once again, I say amen […]

About My Friends Part 1

Okay, My friend Justine just did this, and did a phenomenal job of it, too. I couldn’t believe it, but wow, that was awesome. Now I’m obligated to do this myself..so in response to what […]