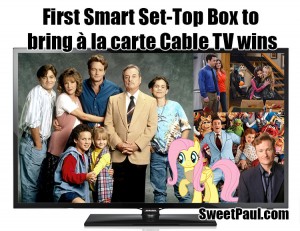 Roku, Chromecast, Amazon FireTV, and Apple TV are all fighting for our attention as a device through which we consume our content. And they’re not all. Years ago, WebTV provided a glimpse into what the world would be like in the future. It paved the way for TiVo and ultimately lead the way to Slingbox, Western Digital’s WD TV, Netgear’s NeoTV and more.

Now the race is on to take over our living rooms. If you don’t have a game console likeÂ Wii U,Â Xbox orÂ Playstation, other options for streaming Netflix, Hulu and Amazon Instant Video include Smart TVs, Smarter Blu-ray players and even your cable boxes.

Devices like Roku, Amazon FireTV and Apple TV come in at up to $99, while Google’s Chromecast will run you a mere $35 (and I’ve seen sales around $25-30). All of these devices go a long way toward getting people to cut the cable TV entirely, by providing streaming for all of the shows that people want.

But there’s a problem, and I think the first set-top box to solve it will change the future.

Smart Set-Top Boxes merely provide streaming of movies and TV shows from various networks, and sometimes cable channels if you’re a subscriber to a service like Comcast. And you’re limited to the channels that are part of your service contract, and worse, channels that you don’t even want.

My wife and I counted a total of 35 channels that we’d actually like to have access to. I’m sure there are a few more that we’d add to that, but those were just channels we could think of when we discussed this concept.

This fix is probably much more difficult than we think, but the first company to figure it out will likely take the market by storm. If you could use one device to stream movies and TV shows from your favorite subscription service, plus access the live feed of the channels that you’ve chosen to be part of your cable TV plan, would you do it? I definitely would. Especially if I could drop channels like MTV and Comedy Central and add channels like The Hub and DisneyXD.

There are two solutions to that.

First, there could be a recommended channels section of whatever interface you use to select channels. It would use viewing habits, frequently watched shows, and data from other similar subscribers to recommend new channels for you.

Second, there could be at least one channel dedicated to week-long trial runs of other channels. When I was a kid, Disney Channel was a pay channel, and every so often we’d have it for free for a week or two while they tried to get more subscribers. There were also times when we’d get free HBO, Starz and other channels.