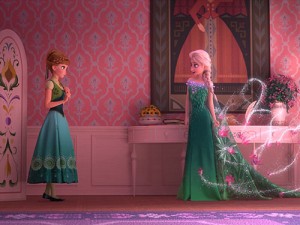 Disney has announcedÂ Frozen 2. It is official, and I’m looking forward to it. However you feel aboutÂ Frozen, it’s still an excellent film with a wonderful message. I have friends with kids that have probably seen and heard the beginning of the movie a few hundred times. It’s not something that I’ve dealt with, but I bet that I will at some point in the future. I can only hope that it’s a movie at least half as good asÂ Frozen. I don’t honestly think I’d mind having it “overplayed” though. I have a pretty high tolerance for repeated viewing of excellence.

The only thing I’m worried about, here, is where the story goes next. TheÂ Frozen Fever short that is playing before Disney’s newÂ Cinderella (2015) was enough for me to get excited for another story set in that world, but I do know that it’s going to be quite a few years before the sequel is ready. The first thing that people tend to say is “I hope they don’t ruin it!” But my question to you is this: when has a sequel ever ruined the first movie for you? DidÂ The Return of Jafar ruinÂ Aladdin for you? DidÂ The Empire Strikes Back ruinÂ Star Wars for you?

These days, under the guidance of Bob Iger and John Lassetter, Disney Animation Studios (and all Disney production) will only create a sequel if they have a story that wants to be told. That doesn’t mean that they aren’t going to try a sequel when they have a hit as large asÂ Frozen. We’ve seen what happened when Pixar made a sequel toÂ Cars that wasn’t quite as good. It still wasn’t a failure by any means, it was just different. We’ve also seen two sequels toÂ Toy Story, with each being better than the last. They’ve also created two shorter specials with the characters, and are now working onÂ Toy Story 4. Needless to say, Disney has earned my confidence. The days of the sequel for no reason seem to be safely behind us, when it comes to major motion pictures.

I’m in for this one.

Now, I need to tell you about the Nendoroid Elsa. Here’s the description from the company’s website:

From the hit film ‘Frozen’ comes a Nendoroid of the Arendelle Royal Family’s eldest daughter, Elsa! Her intricate dress has been carefully transformed into Nendoroid size, even including the faint yet beautiful snowflake patterns! She comes with three expressions including a cute smiling face, a sidelong glance with a smirk and a singing face that looks ready to shout out ‘Let it Go!’ at any moment!

Olaf, the enchanted snowman with a love for Summer is also included with his comical expression from the series faithfully reproduced – his neck and arms are also articulated allowing you to recreate all sorts of fun scenes for the snowman too! A special Nendoroid base based on Elsa’s ice castle is also included to display them on!