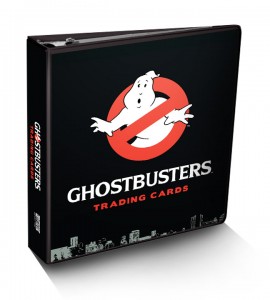 As a massive fan of Ghostbusters, it’s been exciting to see all of the new things being released over the past seven years or so. There have been tons of action figures, pop vinyl, video games, comic books, and more, all leading up to the eventual release of more movies. This year there was also a Kickstarter forÂ Ghostbusters: The Board Game. Â The company behind that game is also creating a set ofÂ Ghostbusters Trading Cards.

The base set contains 63 cards with images from the originalÂ Ghostbusters motion picture. While it is unclear what else is going to be included, the listing on their website says that it will contain images from the fan favorite films, so that could meanÂ Ghostbusters 2 as well, in some regard. It also mentionsÂ The Real Ghostbusters and the IDW comic book series.

There will also be randomly inserted autographed cards, hand-drawn sketch cards and authentic animation cel cards. Plus, they are also going to release a binder that includes an exclusive card that you’ll only find there.

Here are the details about the set:

Base Set:Â 63Â card base set

‘Everything is Awesome’ as Lego Movie directors might film ‘Ghostbusters 3’

Before I sawÂ The LEGO Movie, I would have thought this was the worst idea that I’ve heard forÂ Ghostbusters 3. According to a tweet from Nikki Finke, who seems to get a lot of factual scoops […]