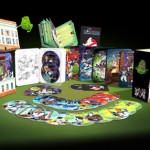 I’ve been re-watching my complete collection DVD set of The Real Ghostbusters in the last few days.Â  It looks brilliant on my HDTV.Â  I’m hoping for a release of the late nineties series Extreme Ghostbusters on DVD sometime soon.Â  It was one cartoon that didn’t get a fair shake, potentially because of the much darker subject matter of the series.Â  The Real Ghostbusters rarely delved as deeply into dark topics.Â  When it did, the good guys weren’t the ones doing it.Â  Extreme Ghostbusters is fundamentally flawed in that regard, but in favor of a complete collection, I’d love to have it.Â  Especially because the two parter Back in the Saddle brings all of the original Ghostbusters back for an adventure.Â  Which leads me to the topic of this article.

Could a new Ghostbusters cartoon be released sometime in the next few years?Â  It’s possible.Â  The third movie is currently being re-written.Â  They’re on the second draft, I believe.Â  It’s likely that they’ll be shooting it sometime this fall, from what I’m hearing.Â  The news about it is coming out seemingly every few weeks or so, when someone is able to ask one of the writers or creative team members about it all.

With these series getting new life with new styles and formats, it’s possible that Ghostbusters could make the return to Saturday Mornings.Â  Ghostbusters 3 is going to bring more awareness to the franchise.Â  Ghostbusters: The Video Game has started to bring awareness to higher levels.Â  And that’s not to mention the logo, which is one of the most recognizable logos in the world.

What would a new Ghostbusters cartoon look like?Â  I suppose that depends on what Ghostbusters 3 looks like.Â  Personally, I would like to see a cartoon that is similar in style to The Real Ghostbusters.Â  While Extreme Ghostbusters did a fair job of that, it missed the boat on a number of occasions, being too dark for younger children.Â  I’d love to have the writing style and format of the series return, with the new characters and the setting being around the time of the new film.Â  That way, they can do what RGB did, and tell new stories in that world, without stepping on the stories that potential new films in the series could bring.

“Packs on!” Dan Aykroyd confirms Ghostbusters 3; will produce with Reitman

Dan Aykroyd has confirmed thatÂ Ghostbusters 3 is coming, and he’s going to be producing with Ivan Reitman. No word on if he’ll also be in it, but I think it’s safe to assume that he […]

I’ve read some really interesting things just now about both Ghostbusters 3 and Ghostbusters: The Video Game. I wanted to bring some things to light that might have been missed, which I feel are worth repeating, […]