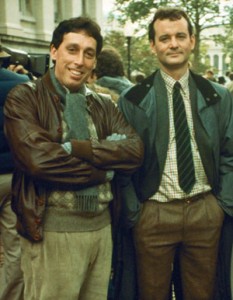 Ivan Reitman has been a great source of knowledge aboutÂ Ghostbusters 3. In one story he addresses all of the rumors that surrounded Bill Murray’s involvement in the third film.

“There were a lot of stories about how he read the script and it wasnâ€™t up to his standards” the director said. “I think he may have read 15 to 20 pages.”

Reitman went on to talk about a dinner they had at the Toronto Film Festival a couple of years ago.

“[The dinner] started at about 10:30 and ended at 4 a.m. We closed down the restaurant. And he just said, â€˜Look, Iâ€™m not interested in doing these movies anymore. I like doing these small parts. I donâ€™t want to feel the weight and the burden of all that.â€™ And I understood it. And it came from a good place in his heart.” (via)

This doesn’t entirely rule out a cameo for Murray, as Dr. Peter Venkman, though. According to the interview, the first script they had for the movie focused on Peter Venkman pretty heavily, and after Murray expressed his wishes not to carry the third film in the franchise, they brought Etan Cohen on board to re-write the script to focus more on new people than the original team.

Reitman also addressed something that’s been kind of another elephant in the room, after Bill Murray: will the film be in 3D? According to Reitman, it could be, and that’s not all.Â â€œCertainly thereâ€™s been a lot of talk about doingÂ Ghostbusters 3Â in 3D as well, and I donâ€™t think weâ€™ll call itÂ Ghostbusters 3Â either,â€ he said.

With the possibility of a new title for the film, what do you think it’s going to be called? Personally, I think this is the right direction, as the goal is to kick off a new film series, while also closing the door on the original team, kind of like the newÂ Star Wars appears to be doing.

It’s also confirmed that this is not a reboot:Â â€œItâ€™s not a reboot,â€ he said. â€œIt just lives in a world where the first two movies did occur and those characters were there and at least some of them will be in this film, but itâ€™s really a different story.â€ (via)

There may or may not be femaleÂ Ghostbusters this time around, which I’m sure will only be decided once casting is underway. It’s also going to use CGI, which isn’t surprising. They did so withÂ Ghostbusters II as well, though the first film just used traditional effects.

It’s good to finally have some more solid information about the thirdÂ Ghostbusters film.

Ghostbusters: The Other Side #1: Review