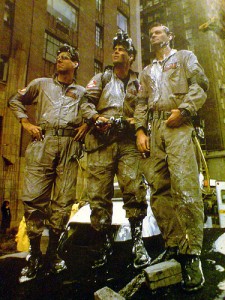 Dan Aykroyd and Harold Ramis have commented on the upcoming Ghostbusters 3 script that is in the works, and in the process revealed some new plot points as well as new Ghostbusting tools that will be at their disposal. I am assuming this is in addition to the classic and iconic Proton Pack, which wasn’t mentioned, but most definitely will be a part of it.

This is really interesting and I wonder who it could possibly be. The first time that I read this, I took it to mean that the person training the Ghostbuster Cadets was who he was referring to. But reading it again, it seems that he means a new leader for the new group of primary Ghostbusters.

Having a ton of teams would make this pretty confusing and almost over-flowing with too many busters out and about. It is reminiscent of the Stargate SG-1 format, though. To my mind, I could see this working as an SG-1 style series, though. But that’s another idea for another day.

Back to the leader for the new Ghostbusters team… I never really thought there was a single standout leader of the original team.  That’s what made it so interesting and a great playground game.  Each character played a role and not one of them was more important than the other. I suppose, though, if you take it from an SG-1 style of team, that has a ranking leader who is the first among equals. Combining that sentiment with that of the original Ghostbusters formula could work so that the team dynamic isn’t lost to the structure of a military format.

Now, onto the tools of the trade. Aykroyd comments: “They’ll be lots of cadets, boys and girls, who’ll be learning how to use the psychotron, the accelerators and all the new stuff, the neuron splitter, which is going to be the interplaner, interceptor and all these great tools that they’re going to have, to flip from dimension to dimension.”

The first thing that I thought was: holy smokes, that’s a lot of information to take in. It’s kind of overwhelming. Especially when we’ve only had a few tools between Ghostbusters 1 and 2 and the RGB series (not to mention Extreme Ghostbusters): The Proton Pack, The Slime Blower, The Ghost Trap, the PKE Meter and the Giger Meter. Ã‚ Now there are some pretty fascinating new tools:

Psychotron: ? No idea what this could be for.

Neuron Splitter: ? Allows the user to flip from dimension to dimension? Does that mean between the dimension of the dead and the living? Multi-spacial dimensions? Interesting… hopefully it’s not super cheesy and used within the realms of reality as much as possible, like the original films.

I’ve been re-watching my complete collection DVD set of The Real Ghostbusters in the last few days.Â  It looks brilliant on my HDTV.Â  I’m hoping for a release of the late nineties series Extreme Ghostbusters […]

How to make a true Ghostbusters sequel

Paul Feig is working on a reboot ofÂ Ghostbusters and there are other films also in the works that may or may not be connected to the original two films. Feig has said that he could […]