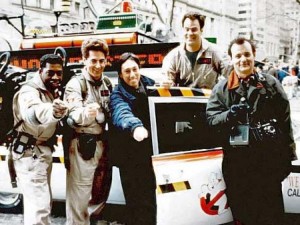 The other members of the Ghostbusters, and the director of the first two films (and potentially the third) pay their respects to actor Harold Ramis. For those that don’t know, Harold Ramis played Egon Spengler inÂ Ghostbusters andÂ Ghostbusters II. Â He returned to the character, lending his voice toÂ Ghostbusters: The Video Game, and was due to cameo in a scene as Egon inÂ Ghostbusters 3. Â Ramis passed away on February 24, and I wanted to share what the others had to say about Ramis.

Ivan Reitman, director: “The world has lost a wonderful, truly original, comedy voice with the passing of Harold Ramis. He possessed the most agile mind I’ve ever witnessed. He always had the clearest sense of what was funny and how to create something in a new clever way … Harold had an extraordinary impact on my career and I loved him like a brother.”

Dan Aykroyd (Raymond Stantz):Â “Deeply saddened to hear of the passing of my brilliant, gifted, funny friend, co-writer/performer and teacher Harold Ramis. May he now get the answers he was always seeking.”

Bill Murray (Peter Venkman): “Harold Ramis and I together did theÂ National Lampoon ShowÂ off Broadway,Â Meatballs,Â Stripes,Â Caddyshack,Â GhostbustersÂ andÂ Groundhog Day. He earned his keep on this planet. God bless him.”

Ernie Hudson (Winston Zeddmore): “Harold was the glue. There wouldnâ€™t a â€˜Ghostbustersâ€™ without Harold Ramis. Harold Pulled it together. And I know I probably wouldnâ€™t be in the business had I not had the chance to work with Harold at that time in my career. He taught me a lot, not overtly by trying to teach me, just watching him work and how he dealt with things. He will be missed.”

A Tribute to a Ghostbuster: R.I.P. Harold Ramis

It’s hard for me to put into words what it’s like to lose a member of the family. I think it’s hard for all of us. Last year, I lost three grandparents: my grandma, and […]

I’ve been following thisÂ Ghostbusters documentary for eight years. Now it’s closer than ever to completion, but it needs your help. The filmmakers have spent the last eight years making several trips to the United States […]

Ghostbusters 3: Ivan Reitman to Direct, and in 3-D?

Since I last wrote about Ghostbusters 3, there has been some major progress.Â  First is that Ivan Reitman is going to return to the directors chair.Â  This is a positive, in my book, even though […]