It’s been a while since I’ve updated, and I figured that I’d write a quick story to let you know that I’m still here, and still writing things.Â  In fact, I’ve been doing a lot of writing as well as traveling.Â  I got married, and have been on my honeymoon, but once everything gets settled down, I should have a bit of time to write up more about all of that.

In the meantime, Conan O’Brien will be returning to TV in a little more than a month.Â  His new show is simply called Conan and it premieres on November 8 on TBS at 11pm.

The logo for the show has also been revealed, as you can see here.

If you would like to keep up with the show, they have plenty of ways to do so:

I commented on TeamCoco about the new logo, saying: I need that on a T-Shirt, a mug, a hat, a Zip-up Hoodie and a Jacket!

Or just put it on a jogging suit, and include a Conan wig and sweatband to hold the wig in place as I run around the neighborhood.

Conan’s blogger Bley responded: Or what about a hoodie with the hair attached?! 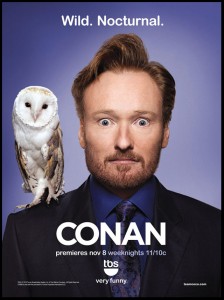 Conan O’Brien’s The Legally Prohibited from Being Funny on Television Tour has been announced.Â  Not only is Conan’s tour missing Michigan, but the two Chicago shows sold out pretty much instantly.Â  The only tickets left […]

Proof positive of the effectiveness of being creative, original and actually funny: The Tonight Show with Conan O’Brien has not only been nominated for one Emmy, but FOUR.Â  And Jay Leno’s Tonight Show received no […]

“There has been a lot of speculation in the press about what I legally can and can’t say about NBC. To set the record straight, tonight I am allowed to say anything I want. And […]