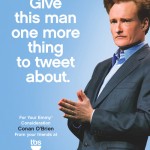 Proof positive of the effectiveness of being creative, original and actually funny: The Tonight Show with Conan O’Brien has not only been nominated for one Emmy, but FOUR.Â  And Jay Leno’s Tonight Show received no nominations.Â  Not only that, but ratings since Leno returned have been worse than they’ve been since 1993.Â  NBC actually congratulated Conan, saying “We congratulate Conan and all our nominees on their creative accomplishments and their deserved nominations.”

Conan also tweeted about the nominations, saying “Congrats to my staff on 4 Emmy nominations. This bodes well for the future of The Tonight Show with Conan Oâ€™Brien.” 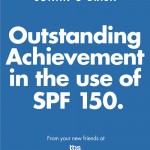 TBS is likely responsible for Conan’s nominations, having campaigned for him when NBC did not.Â  Conan’s class-act attitude about the entire situation is also a big part of the nominations, I’m sure.

The Tonight Show with Conan O’Brien swept the categories for which it could have been nominated:

Conan O’Brien’s The Legally Prohibited from Being Funny on Television Tour has been announced.Â  Not only is Conan’s tour missing Michigan, but the two Chicago shows sold out pretty much instantly.Â  The only tickets left […]

Jay Leno should do the noble thing and quit.Â  Making the affiliates happy is not Conan’s problem, it falls on NBC.Â  The affiliates wanted one thing: programming that kept people watching until the news.Â  CLEARLY […]

I just saw a sketch on Conan that featured a clip from the upcoming series Young Justice featuring Conan’s superhero character The Flaming C.Â  Suddenly I saw a lot of traffic from search engines and […]