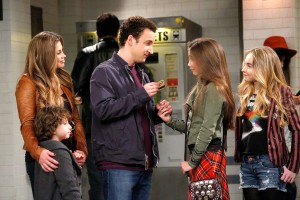 If you know me, you know that I’m a big fan ofÂ Boy Meets World. After watching the complete series on DVD a few years ago, I looked up the cast online and tweeted them my thanks for an incredible series. I watched most of it when it was originally on TV, and was practically always the same age as the characters in the show, except when they jumped over a couple of years here and there. I also remember thinking, when I finished the seventh season, that I wished there was more, so I could see where the characters went from there. And then it happened. Disney announcedÂ Girl Meets World would be coming. A couple of years later, it started, and it’s everything that I could have wanted from a sequel toÂ Boy Meets World.

At this point, we’re about five episodes into the first season of the show, but it’s already shown the same quality of writing, moral lessons and heart of the last series. The fact that they have many of the original members of the creative team fromÂ Boy Meets World involved really shows.Â In style, it’s kind of a mix of the first few seasons of Boy Meets World. I watched the complete series of Boy Meets WorldÂ again, this year, to prepare. Girl Meets WorldÂ is like catching up with old friends who now have kids of their own. Ben Savage’s physical comedy hasn’t skipped a beat, either.

Today, Disney Channel announced thatÂ Girl Meets World will have a second season! Hopefully the show brings us all the way to season seven, so we can see a conclusion that somehow mirrors the one at the end ofÂ Boy Meets World. This announcement brings us one step closer! Also of note is thatÂ Girl Meets World is the #1 ranked show among kids and tweens, and has been ever since it premiered. It’s found an audience with fans of the original show, as well (clearly).

“The series swiftly became a favorite of kids and their parents, many of whom grew up with ‘Boy Meets World,'” Bonnett said. “We’re looking forward to watching Riley Matthews and Maya Hart make the world their own, as Cory and Topanga teach them life lessons along the way.”

Season one introduces best friends Riley and Maya as they navigate the ups and downs of junior high; episodes include special appearances by several beloved characters from “Boy Meets World,” including Mr. Feeney, who guest starred in the series premiere (played by William Daniels) and Minkus (actor Lee Norris) in an episode premiering Friday, August 15.

New episodes of “Girl Meets World” airÂ FridaysÂ  on Disney Channel. The series is a production of It’s A Laugh Productions, Inc. and Michael Jacobs Productions and carries a TV-G parental guideline.

Disney Channel is a 24-hour kid-driven, family-inclusive television network that taps into the world of kids and families through original series and movies. Currently available on basic cable and satellite in nearly 97 million U.S. homes and to millions of other viewers on Disney Channels around the world, Disney Channel is part of the Disney/ABC Television Group.

Boy Meets World is one of the best TV shows ever created. Seven seasons of quality television and the world was never really ready to say goodbye to the cast. Here we are, mere months […]

Alright. They’ve announced the titles of the first three episodes of Season 2 of Lost. Lost is currently my favorite show on television, so bear with me as I pull out the analyitical side of […]

The Muppets to appear on Good Luck Charlie Season 4 Premiere

As readers of this blog may already know, I’m a pretty big fan of The Muppets.Â  I thought the last film, 2011’s The Muppets was a return to form, and the first that I’ve thoroughly […]