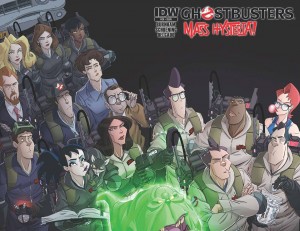 IDW Publishing announced this week that the end has come for theÂ Ghostbusters comic book that has delivered excellent content for the better part of three years. I’m very proud of the team that created it. It brought back the feel of the movies and the cartoons at the same time, while delivering great new adventures on a monthly basis.

I have hope that one day, IDW will bring this great team back together for another go-round. It’s the reason I started reading comics again. I’ve bought at least two copies of every single issue, and gotten many issues graded (now I could do the rest of the series, knowing there’s an end in sight). I’ve also got them all digital (all released so far), and I’ve been planning to get the Total Containment book version, and hoped to get a volume 2 with the next part. Hope that’s still a possibility.

My thoughts are somewhat complex as to why this happened. I know that it was a tough decision by those involved, but it seems to me that there might be larger reasons in play for this. This announcement comes mere weeks before Comic-Con. TheÂ Ghostbusters 30th anniversary is afoot. There may well be some pretty big announcements on the way from Sony, regarding the long awaited third Ghostbusters movie. There may even be otherÂ GhostbustersÂ media announcements, like a new cartoon, toy line, and other things.

Either way, I can’t say I didn’t do my part to support this comic book, and I hope that you pick up some issues in this great series. I don’t think you’ll be disappointed that you did. It’s been a fun ride, and it will be bittersweet when the final issue arrives in my mailbox, but I can always go back and read them all over again.

THE FINAL ISSUE OF GHOSTBUSTERS! Mass Hysteria comes to an end and the Ghostbusters discover the price of driving Tiamat from the city, county, and state of New York! But just because the Big Bad is beaten, it doesn’t mean psychokinetic shenanigans are on the wane — there’s always another job on deck for the boys (and girls!) in grey! Don’t miss the bombastically chaotic conclusion to IDW’s ghoulishly ground-breaking GHOSTBUSTERS run!

IDW’s Ghostbusters series finale announced. Thanks to all the fans that supported us and this title!!!Â TOM WALTZ (EDITOR):Â “Ghostbusters Fans, It’s my sad duty to confirm that, yes, Ghostbusters #20 is not only the final issue of our Mass Hysteria! event, but also of our current ongoing comic, as well. A variety of factors went into this decision, but please know that it was very difficult foreveryone involved in the decision to bring our beloved ongoing GB series to an end.

That said, we do have a few BIG surprises in store yet, not the least of which is the magnificent ending Erik Burnham, Dan Schoening and Luis Antonio Delgado have put together for Mass Hysteria!

Soâ€¦ if we gotta go, you can be damn sure we’re doing it in high, rockin’ fashion, folks!

You guys are the best! Thanks for all the spirited (yes, I said it) support throughout the years! This is the best editing gig I’ve been blessed to have in my career.”

ERIK BURNHAM (WRITER):Â
“Ghostbusters has been, bar none, my favorite job in comics. I was in sync with my collaborators from day one, working on characters we all love.

And I was happy that so many readers got what we were going for: fun, pure and simple. In fact, since news of the announcement, many have come forward to tell me that this book got them into (and back into) comics, and that means a LOT to me. Itâ€™s good to be the gateway to a medium.

While #20 is the end of Mass Hysteria and is billed as the final issue, the world is a funny place. Final could mean the end, or it could simply signal a mere break before the universe surprises me with another chance to hang out with the boys (and girls) in grey. I won’t know until something happens… or doesn’t. The suspense is killing me.
If the call comes to return, I’ll be ready. If it doesn’t, I’ll be grateful to Sony and IDW for allowing me to enjoy my work THIS much. I’ll also be grateful to Tom Waltz, Dan Schoening, and Luis Delgado for putting up with me for so many years. I donâ€™t want to go, I admit it. I loved this plan â€“ er, book â€“ and I was excited to be a part of it!”

T-REX JONES (ARTIST/WRITER):
“You’re all amazing, beautiful, passionate people. Tom, Dan, Luis and Erik, you guys welcomed me with open arms and made me part of a team I don’t think will ever be topped. But more importantly, you guys reading this — the fans, the readers, the ones that supported us… I can’t truly express how much it means to me. Your support and friendship is, and always will be, what I will cherish from my time on this book. I didn’t do much, but you guys made it feel like so much more. See you on the Other Side, guysâ€¦”

DAN SCHOENING (ARTIST):
“For over the past 3 years, I’ve had the privilege to pencil something that I hold dear to my heart, Ghostbusters. Being a part of the Ghostbusters mythos is something I’m extremely proud of, a dream come true. Tom Waltz, Erik Burnham, Luis Delgado and Tristan Jones… you couldn’t ask for a more passionate and talented team. Each of us love Ghostbusters, and I feel it shows in the comics. I’d like to thank everyone at IDW, Sony, and most importantly the fans. The support and enthusiasm you all shared helped keep the protons charged, and for that I’m forever grateful.

So, for a quick recap, our boys in grey; Stopped The Third Minion of Gozer, and blew up a hundred-foot marshmallow man off an uptown high rise….again. Foiled the plans of a Class 6 soul hungry horror who haunted an amusement park. Traveled from East to West, battling armies, aliens, voodoo and a guitar ghoul. Had competition in the ghost busting business, and cleaned up the mess. Were whisked away by demons, only to find their way back traveling through the holidays to bust a bogeyman. Went up against a Mesopotamian God of Chaosâ€¦. Yeahâ€¦ but what a ride.”

LUIS ANTONIO DELGADO (COLORIST):
“Three years, 36 issues and over 700 pages of ghoul hunting, demon fighting and ghost busting, is an incredible thing to be a part of, it’s a tale I will tell for the rest of my life; and to make it even more meaningful, I was lucky enough to share it with the most amazing group of talent and friends anyone can wish for. Tom, Dan, Erik and Tristan, they made this whole road a lot easier to take, and for that, I will always be grateful.

Sony and IDW were kind enough to allow me to be a part of this amazing experience, I will never have the words to thank them for that. But the real gift was the knowledge that the fans, the real fans who love this characters more than anyone else, found our work worth it, to know that they enjoyed it enough to let it into their lives, made this whole journey one for the ages.

I don’t know what lays ahead for any of us, but I do know that if we ever find ourselves back into this wonderful world of Ghostbusters, we’ll be more than happy to return, and if we don’t, all we can say is thanks, thanks for time that was given to us and thanks for all the people who share it. In the words of someone wiser than me ‘Go then. There are other worlds than these.'”

‘Everything is Awesome’ as Lego Movie directors might film ‘Ghostbusters 3’

Before I sawÂ The LEGO Movie, I would have thought this was the worst idea that I’ve heard forÂ Ghostbusters 3. According to a tweet from Nikki Finke, who seems to get a lot of factual scoops […]