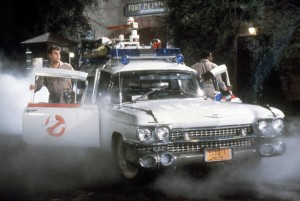 Paul Feig is working on a reboot ofÂ Ghostbusters and there are other films also in the works that may or may not be connected to the original two films. Feig has said that he could not figure out how to make a sequel work 25 years later. He also wants to have the sequel be a total origin story because he loves those. He even usedÂ Iron Man as an example, with the first film being fun because it was about the origin of the character, versus the sequel because we already know the character and what they’re capable of.

Thing is, even the originalÂ Ghostbusters isn’tÂ really an origin story. We don’t know why the three main guys were doing paranormal research at Columbia University, or why they stuck with each other after being kicked out of the university. We don’t know their backstories or why they’re interested in the paranormal. We never see them build the proton packs, traps, or containment unit. We just know that they didn’t have any of this stuff, and then they did. And that’s where Feig’s movie could draw its’ inspiration and actually BE a sequel to the originals.

Feig wants it to be in a world that doesn’t believe in ghosts, that discovers that ghosts are real. The strength here is that, it’s been 25 years since the last major ghost related event. An entire generation has grown up since then, living without a supernatural presence that they know happened. Similar to how children today will hopefully never really understand 9/11 because they didn’t experience it, likewise the way my generation didn’t really understand the gravity of the JFK assassination.

On top of all of that, by the time ofÂ Ghostbusters 2, which was only FIVE years later, there were skeptics. This comes from all sides… at a birthday party where a kid tells Ray that his dad said they were “full of crap” and that’s why they “went out of business.” So it’s already been set up that the world won’t just buy into this. Especially in New York City, where people sitting in a restaurant barely reacted to Louis when he slid down the window outside of the Tavern on the Green.

So, here’s where the movie begins. The four women that are going to join forces to become the next group of Ghostbusters have separate experiences that lead them toward that goal. If one of them is in a ghost hunting group, it’s because they were inspired by stories they’d heard about ghosts in the past and wanted to validate that which has been deemed invalid by the science community, which calls what they do “pseudo-science” as an insult that invalidates everything they’re doing.

Whatever menace it is that arises, they wind up joining forces, discovering that the original team hung up their packs after that even in 1989, and attempt to restart that business. And when they do, that’s when they meet Ray and Winston. Ray and Winston agree to show them the ropes, and that’s when they go back to the old firehouse for the first time. It’s nearly as spider-webbed as it was in the first film. They go downstairs to a vault, and when they open the door, there they see the old Proton Packs, still ready to go.

They go on their first call with Ray and Winston, which is reminiscent of the Slimer call from the first film. After that comes a montage where our new team is going around busting ghosts. Ray and Winston serve more as trainers and advisers from that point forward.

What do you think? Would this concept work? Is this too formulaic?

IDW Publishing announced this week that the end has come for theÂ Ghostbusters comic book that has delivered excellent content for the better part of three years. I’m very proud of the team that created it. […]

This interview makes it seem like Sigourney won’t be coming back for the third Ghostbusters film, but without a finished script, we don’t know any more than she does about her character appearing in the […]