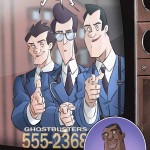 A little more than a year ago, I wrote about how I felt that a new Ghostbusters animated series was possible with the upcoming motion picture event that is Ghostbusters 3.Â  I’m hoping that Bill Murray actually reads the script and says he’ll do the film.Â  Not only will it satisfy my want for another film in the series, but it’ll also give a lot of people work this year.

I read something else that made me excited today, though, and that is the announcement of the monthly publication of a Ghostbusters comic book.Â  This is something that I have been hoping for, and the reason that I bought all of the Ghostbusters comics that have been released within the last few years.Â  IDW has finally decided to make it a monthly series, though, and it seems that fan favorite artist Dapper Dan is going to have a hand in it, if not be the series’ artist for a few issues.Â  I really like his style.Â  It evokes thoughts of what an animated series would look like if it were based on his artistic style.Â  I have a feeling that it would be just different enough from The Real Ghostbusters to make it a new, and not derivative, series that is distinct and original.

Of course I would love to see most of the writers from The Real Ghostbusters return to the writer’s room on a new series.Â  However, I also think Paul Dini would be an awesome addition to the writing team, as he has proven time and again with his work on Batman: The Animated Series among others.Â  Bruce Timm also went on to work on many of the DC Animated Universe projects, but would be great to have back on the team (he created some character designs for The Real Ghostbusters).Â  In fact, there were many creators from RGB that went on to work on Batman: TAS.

Many of them will likely be busy working on future DC Animated Universe films as well as Green Lantern: The Animated Series, but that also brings up another idea: direct-to-video animated movies.Â  Why not create a feature length animated Ghostbusters film to either pilot a new animated television series, or to kick off a series of animated features?Â  Both Marvel and DC are releasing DTV features to varying degrees of success, and I think that this franchise could sustain something like that.

What do you guys think?Â  Are you excited for the upcoming monthly Ghostbusters comics from IDW?Â  Would you like to see a new animated series?Â  Would you like a series of animated features released direct to video?Â  If they decided to create a new series, what would you want it to be like?

Ghostbusters 3 to shoot this fall?

Wow! I just decided to check out some movie news, and found something that got me very cautiously excited. When I read it, I didn’t believe it. I still sort of think that I’m only […]