This month is light on the releases that I actually want to see. In fact, at this time there is only one film releasing during the pre-summer movie month that I am even interested in.

“Of all the planets in our universe, there is only one we know can support life.” 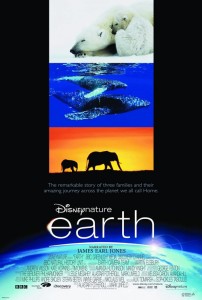 This is the first release by Disney’s new imprint Disneynature. Based on the trailer, the visuals for the film are absolutely incredible.

The film follows three families. A family of Polar Bears, a family of humpback whales and a family of elephants.

Part of the intrigue for me is the music in the trailer. It’s a song called “HoppiÂ­polla” by a band called Sigur Ros. I’ve not heard anything about it being in the film, but it appears on their fourth album, called “Takk…”

It’s a film that was released internationally in 2007 with the narration done by Patrick Stewart. I don’t know why it’s been done, but they’ve narrated it again with James Earl Jones doing the narration for the U.S. release.

In reading more about it, I found myself wanting to read less, as people are complaining that it aired on Discovery already as part of a series called “Planet Earth.” I’m not sure that these folks understand what actually happened though. It does use footage from the series, but it’s re-edited here, into the structure of the film. It acts as supplemental material to the film. But the film does feature more original sequences that appear only as part of the film. It was shot entirely in High Definition, using the latest techniques on 35mm. I wish people would educate themselves about the movie so they don’t keep spreading ill-informed lies about it that are only half-correct.

Other than that, if the film’s music doesn’t capture the majestic tone of the music in the trailer, that will leave me particularly disappointed with the film, I think. I really love film music, and look forward to movies because of what music might come from it.

The Backstrokes: Melissa Nicklowitz (Vocals), Rob Antecki (Piano & Keyboards), Ã‚ Justin Dore (Guitar), Kyle Tomczyk (Drums) A friend of mine named Rob Antecki is in a band called The Backstrokes. He asked that we […]