I’ve just found the list of the robots that will be in the film on both sides of the war. If you don’t want to be spoiled, don’t read it. For the rest of us that could care less about who appears in it, and just would like to know, read on. I think there are some pretty great ones. 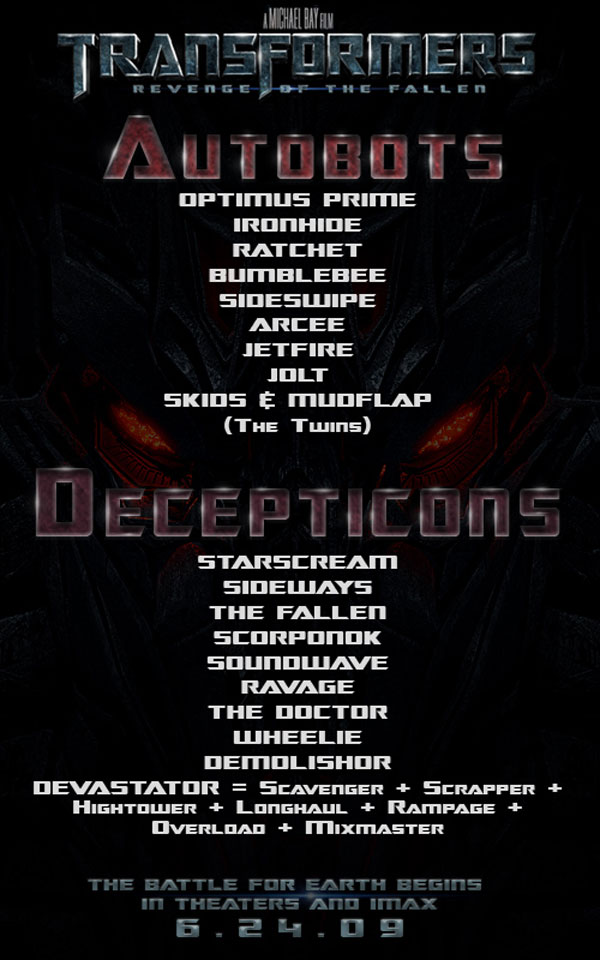 Now, I spoiled something for myself… or rather, MTV spoiled something for me. They don’t care about hiding spoilers from eyes that don’t want to see it, so the name of the freaking ARTICLE revealed the name of a robot that dies in the movie. I didn’t want to know pivotal things like that before I saw it on screen.. That’s the sort of thing that is best kept to the film experience.

There were a couple of other things in the article that caught my attention. I’m pretty excited about seeing it on IMAX now. More than I was before, because of one thing: Devastator. Michael Bay says that this is the first time anyone has done IMAX quality special effects, and they didn’t hold out when shooting a spectacular fight with Devastator, using IMAX cameras.

The other thing that caught my attention, I’m not totally thrilled about. I guess if he did this in the first movie, it was a given that he would do it again. I know that some will be happy about this, but I don’t really like it.

“[Wait until you see] the very first shot in the movie,” he replied when we asked whether Megan gets a moment as memorable as her hood-opening flirtation with Bay’s lingering camera in the first film. “You’ll see.”

Glad that Michael Bay distanced himself from the shot and revealed his target audience for it. It really creeped me out when I was in line for Transformers on the IMAX and these two older guys were there with their sons, and they were talking about Megan Fox. It’s like, hello guys, you’re married, try to set a good example for your boys.

I still think it’s going to be my favorite movie of the summer, though.

Transformers: Revenge of the Fallen Review, and my TF2 Wish List

I still need to decompress what I’ve just witnessed.Â  While I don’t appreciate, or approve of, Michael Bay’s sense of humor, I do think he finally got something right: he let the Transformers hold actual […]

Transformers 4 – Michael Bay to Direct – My List of Requests

I just learned that Paramount has scheduled Transformers 4 for release on June 29, 2014.Â  They’ve also put Michael Bay back in the director’s chair.Â  That’s kind of disappointing, but also not entirely unexpected.Â  That […]

My Most Anticipated Films of 2018

Here’s my latest list of anticipated films for the year. Based on my track-record lately, I’ll probably see about half of the movies on the list below during the calendar year. (Especially since it’s hard […]