A few months ago I had an idea that, while imperfect, could have resulted in a much better response to The Phantom Menace.Â  Would the movie play better if every Neimoidian character was replaced with a human in an Imperial officer uniform?Â  What a way to start planting the seeds of the Empire early, by making them the Trade Federation.Â  Read to see how this change might have effected all three of the prequels.Â  I haven’t thought through all of these ideas, but I feel like even these subtle changes would make for much stronger films, even as they already are.

Let’s start with The Phantom Menace.

Personally, I think that the actions of the Neimoidians would have seemed a bit less cartoony, and would have come across as more confident and determined.Â  We’d be able to see them think and act in a way that the costume could not.Â  Sadly, as much as I like puppeteering, these were characters that could have done with a more emotional connection with the audience.Â  The toys in the Toy Story films had greater emotional connection with the audience than the Neimoidians.Â  Another thing we never saw, which could have easily been incorporated into the story, was a force-choke on any of the leadership in the Trade Federation.Â  This would have added an element of fear and power to the Sith that was missing.Â  On a separate, but related, note: the already great lightsaber battle at the end could also have been made more powerful if Darth Maul had tried a force choke on Qui-Gon during the scene where the shields were separating them, and Qui-Gon was meditating.Â  But all of that is easier to see when you can read the face of the character it is happening to.

Moving on to Attack of the Clones.

The scene in Attack of the Clones during which Count Dooku courts the support of various leaders (to join the Separatist Council) would be all the more striking if the scene continued.Â  After most of the leaders pledged their support (and then were shown making it official by way of a signature of some sort), a doorway would open, and Imperial officers would walk in and surround the various leaders at the table.Â  At this point, Dooku reveals that all of them would be joining him.Â  The one leader that did not commit, Dooku uses the force on, brutally persuading him to sign.Â  At this time, other leaders become suspicious, and protest, wondering if Dooku has manipulated them all.Â  Then Dooku informs them that their services as the leadership of their parties is no longer required.Â  He force-chokes all of them, and the Imperials take their positions, some a bit more hesitant than others.Â  The contract that the political leaders had just signed and submitted included their resignation and succession documents allowing the imperial leadership to take over, at this time, still called the Trade Federation.

Finally, Revenge of the Sith. 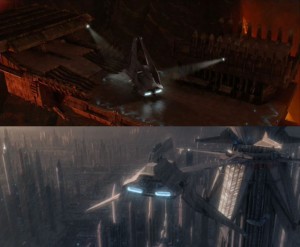 In Revenge of the Sith, Palpatine announces the formation of the first Galactic Empire.Â  After Order 66 is enacted, and most of the Jedi are killed at the hands of the very troops that they were leading, it is now a wash.Â  All various political parties and power players in the universe are now lead by Imperial commanders.Â  They now own the banks, trade, and clones.Â  The scene where Darth Vader enters the building on Mustafar to kill the Separatist Council could have had him killing all except for the Trade Federation leaders.Â  As Vader lands his ship on the platform, we see Federation officers line up at the bottom of the boarding ramp.Â  An officer greets Vader as he departs the ship, and explains that the Separatist Council is waiting inside for him, and they have been ordered to return to Coruscant by the Emperor.Â  Vader then thanks the officer for his loyalty.Â  The officers board a familiar looking Imperial Shuttle that we quickly see flying toward one of the Venator-class Star Destroyers from the end of Attack of the Clones.Â  Vader then enters the building and begins dispatching the Separatist Council as he did originally.Â  It should be noted that the same sort of Imperial Shuttle is what later picks up Vader, after the fight with Obi-Wan Kenobi.

Full Circle with the Original Trilogy.

Then, when we get to the scene in A New Hope, where various imperial leaders are debating what the senate will do, and Grand Moff Tarkin enters the room saying that the last remnants of the old republic have been wiped away, we will have witnessed it happening.Â  Another plus is that all of this goes in-line with the fact that, in the original trilogy, the Empire was made up of humans, with no alien races in sight.Â  This whole concept would make that fact come across in a more powerful way.

For this entry, I’ve been inspired to talk about Star Wars fandom, and what that has become since the prequels.  I became a fan of Star Wars while in junior high, this was in the […]

A rumor has surfaced in the past couple of days that has actor Benedict Cumberbatch potentially playing a role in the newÂ Star Wars trilogy. Â As Cumberbatch recently played a major villain in Abrams’Â Star Trek Into […]

The Case for Mara Jade in Star Wars: Episode IX

Why should Mara Jade appear inÂ Star Wars: Episode IX? A rumor has appeared on the web that director J.J. Abrams and casting director Nina Gold are looking for a woman between age 40 and 50 […]