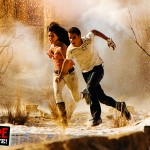 I still need to decompress what I’ve just witnessed.Â  While I don’t appreciate, or approve of, Michael Bay’s sense of humor, I do think he finally got something right: he let the Transformers hold actual conversations with each other.Â  The Autobots spoke more, and the Decepticons definitely spoke a lot more this time around.

I would shave a bit off of the beginning of the movie.Â  Anyone that’s seen it will probably agree: the Pretender, and the first conversation between Sam and Mikaela weren’t really necessary.

Anyway, there are a lot of things that I would like to say about the movie, but I want to bring up something I wrote in 2007: My wishlist for Transformers 2.

Okay. Here’s what my ideal storyline for the next Transformers film would entail.

A huge spaceship called the Ark is headed for Earth. On board are many of the remaining Autobots, answering the call of Optimus Prime. Close behind, Starscream is on-board a Decepticon ship, filled with Decepticons such as Soundwave, among others. As the Ark approaches Earth, the Decepticons damage the ship and it crash lands on the side of a volcanic mountain in a desert region of the United States.

The Decepticons are under the “leadership” of Starscream, returning to Earth to seek revenge. However, Soundwave double crosses Starscream, and finds a way to bring the ship into the Ocean, where Megatron awaits. It is there, under the water, that the Decepticons build a base of operations.

Sam and Mikaela start out the movie having married between films. That takes care of any possibility of a Will Turner/Elizabeth Swann type love story, plus it takes out the “will they/won’t they” and leaves room for more of what we’re all there to see anyway: TRANSFORMERS.

Meanwhile, Optimus leads the Autobots to the crash site of the downed Ark where they form a headquarters.

In the desert lives a boy that already feels like he’s been outcast from society. People look at him differently. Living in the desert, he’s become great with computers, and wishes he could live a “normal” life. His name is Chip Chase, a young computer genius that is confined to a wheelchair. When one of the Autobots is in trouble near by, he is able to come to their aide, and eventually comes to help them out at their base. No longer the outcast, he is one of many that people now admire, the perfect teammate for the Autobots. (In the original animated series, Prowl’s “battle computer” is damaged in a fight with Decepticons. He then goes online to seek help from the Autobots or from Teletran 1, the computer system in the Ark. He, instead, communicates with Chip, who gives him a hand.)

Without the All-Spark Cube, the Decepticons have a new goal: Energon. They’ll take it from wherever they can. And the Autobots have to stop them from getting too much of it, or they’ll be able to construct a new All-Spark Cube.

Thus ends my idea’s for Transformers 2, so far.

I wanted to also fit the Dinobots in, but this is already pretty full, so perhaps Transformers 3.

Anyway, that’s a bit of what I think the sequel should have. I think the story should now be more from the robots’ perspectives.. we’ve gotten the movie that introduces them, now we’re primed and ready for a movie that focuses on them almost entirely.

So, how much of the story did I get right?Â  Well, about half.

More Autobots DID come to Earth, but not in the ARK.Â  Though the Autobots did have a base with the military.Â  Soundwave does appear, but is under-used, and not quite the same as I had hoped he would be.Â  Starscream did, pretty much, what I thought.Â  He brought more Decepticons.Â  They also brought back Megatron, but their base was stationed in space, with The Fallen.

Chip didn’t appear, which I figured, but the Decepticons were now after Energon.Â  That was a cool call-back to the old cartoon, but they didn’t really use it in the same way.Â  Instead, they made it come from stars, making the whole world involved in the battle.

Anyway, there was a lot that happened in this movie, and I’m planning on seeing it a few more times, for sure.Â  It might not be five times, like I saw the first one, but I’m hoping that after time the story of the movie becomes more clear to me.

One other thing that I’d like to point out, however, as a side note that I really loved about the movie, was in it’s reference to God, when a character says “I’ve we were made in God’s image, who’s image were they made in” or something like that.Â  I appreciated that, thoroughly.

Next, after having seen the film again, I’ll be writing my own outline for what I think should happen in Transformers 3.Â  Although it’ll be slightly more difficult, I think.

The Iron Giant is from genius writer/director Brad Bird. Based on a novel called “The Metal Man” or something like that. Brad Bird was making the film WHILE WB was shutting down the Animation division, […]

My Most Anticipated Movies of June 2009: Transformers: Revenge of the Fallen, Land of the Lost

This month features my choice for my potential favorite film of the year. With Transformers: Revenge of the Fallen hitting on the 24th, it’s the date that I am looking forward to the most. Land […]

In November of 1986, Don Bluth and Steven Spielberg brought a little mouse named Fievel into the American conscience. An American Tail is a movie that I have seen countless times since my childhood. When […]