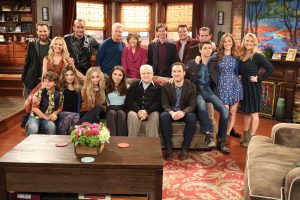 The cancellation ofÂ Girl Meets World by Disney Channel was shocking to all of us. Especially considering shows with similar ratings have gone on to have a fourth and final season on the channel. Disney Channel said that it was because the advertisers they were getting for the show were outside of the demographic that they go after on their channel. I don’t believe that for a minute, though. If you look at other shows they’ve aired, such asÂ I Didn’t Do It, the show could have continued for a fourth and final season just fine. I think Disney Channel was trying to make room on the schedule for two other shows:Â Andi Mack and theÂ That’s So Raven sequel series. The end ofÂ Liv and Maddie also made some room, though, as did the end ofÂ Best Friends Whenever. I also have to note thatÂ K.C. Undercover features leads that are all in the same age group as the characters onÂ Girl Meets World. Perhaps even a little older. Again, making Disney Channel’s claims deflate all the more.

That said, Michael Jacobs mentioned that he would share what the plans were for the fourth season of the show if he couldn’t find a new home for the series to continue. (P.S. If you are interested in trying to help get the show on Netflix, request it here!)

I wasn’t able to find a new venue for the show. I’m sorry. We brought our best and hope we made you think and feel. Until next time. Thanks.Â Grateful to all who have written in support of the show. You are who we did it for. And now to keep a promise:Â Season 4 would’ve shown that what drew Farkle, Lucas and Zay to Riley and Maya was the deep friendship and respect they had for each other.Â And their relationship was the guide in how to meet the world. Especially our current world. Because to find love, friendship and respectÂ must be at the center of it. Cory and Topanga always knew that. So, as you all meet this world, we wish you friendship, respect and love.Â Oh, and Auggie and Ava were forever.Â All of us at BMW and GMW have loved bringing you these stories. We hope we have taught you to dream, try and do good. Class dismissed.

I wish we were getting the fourth season of the show. I wasn’t sure about the characters going in, and watching the show episode by episode didn’t really help that too much. But then I showed my sister a lot of episodes in a row, the ones that featured cast members fromÂ Boy Meets World, mostly, plus some other good episodes. Watching the episodes like that helped to see the characters and stories the way they probably did in the writer’s room on the show. You could see the way the writers were building the world, and adding layers to the show as it went on. There are bits of dialog in episodes that are directly referencing a conversation or a moment from episodes earlier in the season, and possibly the entire series. I only started to notice the callbacks upon rewatching the series, and it made the show much stronger.

The final episode of season three was a good end to the show, rounding out the overall series to ten seasons with Cory and Topanga. I look forward to watching all ten seasons in order sometime soon.

Thank you, Michael Jacobs and the writing team. I know you would have given us more gold, but I’m thankful that we got some more. One of the last times I watched my way throughÂ Boy Meets World, I went looking for another show that was somehow like it. I just wanted more of it. And then that show was announced. It took a while to make it to the screen, but it did, and now having three seasons to add, it feels satisfying to have more content. EffectivelyÂ Boy Meets World seasons 8, 9 and 10.

I look forward to showing my daughter all of this.

(Once more:Â If you are interested in trying to help get the show on Netflix, request it here!)

If you know me, you know that I’m a big fan ofÂ Boy Meets World. After watching the complete series on DVD a few years ago, I looked up the cast online and tweeted them my […]

Boy Meets World is one of the best TV shows ever created. Seven seasons of quality television and the world was never really ready to say goodbye to the cast. Here we are, mere months […]