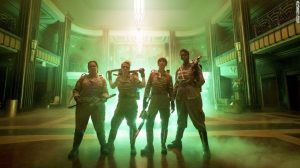 Is the newÂ Ghostbusters any good? Is it terrible?

Let me start with this:

I don’t read reviews of movies that I want to see. I don’t put any stock in RT scores or the like.

If I want to see this a movie, I see the movie. I make up my own mind rather than be influenced by the hive mind.

Critics get the luxury (depending) of being able to see a movie without the influence of reading reviews or seeing a score that colors their own perspective of the movie. Why shouldn’t I also have that experience?

Since I started doing this about 15 years ago, I have enjoyed movies more, and more often. Including movies that have terrible RT scores.

So is GhostbustersÂ 2016 good or bad? Only you can decide for yourself. It is art, and art is subjective to the viewer.

I saw the movie last night in IMAX 3D. I then pre-ordered the Blu-ray after seeing it (itâ€™s going to contain an extended version of the movie, which should hopefully add some much needed padding to the middle of the movie so we can see them progress with their skills).

No. It’s not a better movie than the original. It’s probably somewhere closer toÂ Ghostbusters 2. In some ways better than GB2, and in some ways worse. I’ve only seen it once, and it definitely has some very cheesy moments, but itâ€™s also not terrible. My friend and I both had a good time watching it. It really feels like an extended episode of The Real Ghostbusters or Extreme GhostbustersÂ with an all new team starting things up. Itâ€™s not for everyone (thatâ€™s obvious), but if you go in expecting to hate itâ€¦ you probably will. If you go into it expecting to have a good time for a couple of hoursâ€¦ you probably will.Â It is notÂ a bad movie, though.

What characters stood out?Â Two characters basically steal almost every scene theyâ€™re a part of: Kevin and Jillian Holtzman. Chris Hemsworth and Kate McKinnon are both fantastic in this. If thereâ€™s a sequel, they should have Holtzman go on a mission by herself, because watching just her on a mission would be very entertaining. And Kevin… he had more funny lines than all of the ladies, probably combined. Leslie Jones was at her best when she was quieter, and not yelling. When the ghost was on her shoulders at the rock concert, she was hilariously deadpan.

Ghostbusters Answer the Call?Â In the past few weeks, the movie has had another title on the commercials. People started questioning if Sony Pictures had renamed the movie. Turns out, they have. It wasn’t the title at the start of the movie (though I would have appreciated it appearing there). It was the title they showed at the end of the movie, though.Â Ghostbusters Answer the Call is clearly a better title thanÂ Ghostbusters (2016). It helps to separate it and make it into its’ own thing. You don’t have to explain which film you’re talking about with the year, and it gets to truly be its’ own thing. It should have been called this from the start. It’s not like eachÂ Star Wars movie is confused with the others… they each have their own official title. I hope that the nameÂ Ghostbusters Answer the Call is what they use on the Blu-ray release.

Was it what you wanted? I would have preferred the new Ghostbusters film to follow the same thread as the newÂ Star Wars, and be a continuation of the story. That’s not what we got, and the movie is suffering for that. Honestly, they could have done practically the same thing with some major and some minor adjustments to the story.

Was anything missing? A MONTAGE. One thing that was missing from the movie’s narrative that would have helped immensely is a montage. Each of the first twoÂ Ghostbusters films had them. In this film, they test out equipment, and take on a ghost, and then suddenly they’re on their way to taking out hundreds of ghosts before the big baddie arrives. Give us a montage to see how they progress in their abilities to use their equipment properly. The awkward dancing scene that happens at the time that this montage could occur would actually work well as a partÂ of the montage. Instead, it’s a bit awkward to watch on its’ own.

What should have been improved? Some of the pacing… again… a montage would have helped immensely with this. Also, the villain Rowan was rather weak. He could have been, or should have been, more of a Louis Tully or Janosz Poha.Â He’s actually kind of like Janosz, except that Janosz had someone to talk to, and this guy was an extremely disturbed loner that had a vendetta against all of humanity. We never learn where any of this started for him, and that’s a shame.

How was the music? It was good. There was one part of the score that was particularly awesome, too, and I would have liked to hear more music like that. I’m glad the new cover from Fall Out Boy wasn’t totally featured in the movie more than just a little bit.

Was the movie fun? Yes. My friend Joe and I had a great time watching it. The 3D was impressive and even went outside of the frame, thanks to the IMAX having a taller screen.

Were the original actors in it? Yes. Bill Murray, Dan Aykroyd, Ernie Hudson, Annie Potts and Sigourney Weaver all appear. And there’s a blink and you’ll miss it homage to Harold Ramis, to whom the movie is also dedicated.

This is something that I’ve been hoping for, ever since discovering Lego Cuusoo many years ago. Â I never actually thought it would happen, though. Â There were many Ghostbusters projects on the site, mostly featuring Ecto-1 […]

“Packs on!” Dan Aykroyd confirms Ghostbusters 3; will produce with Reitman

Dan Aykroyd has confirmed thatÂ Ghostbusters 3 is coming, and he’s going to be producing with Ivan Reitman. No word on if he’ll also be in it, but I think it’s safe to assume that he […]