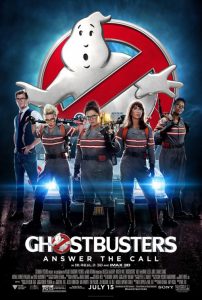 Lately I have had a lot of friends asking me about the newÂ Ghostbusters film. This is because I love the franchise and have since I was a kid, and people wonder how I feel about the movie. The reasons they ask are as varied as their own responses to the film. They either have seen and enjoyed the trailers, seen and been unimpressed, or seen nothing and know nothing of the internet’s general hatred for the new movie that no one has even seen at the time of this writing. So I’m going to take you through my own thoughts at this point, starting with the title.

But what do you think of theÂ Ghostbusters (2016) movie?

Once I see the actual movie in a couple of weeks, I’ll be able to tell you completely. I’ve entirely stopped (and have for the last 10 years or so) reading reviews of movies that I want to see before I see the movies for myself, because I’ve never found a critic that agrees with me 100% of the time. That being said, I read the junior novelization of the new Ghostbusters film, and if the movie was that and nothing more, then it’s basically nothing different from a feature film version of an episode of The Real Ghostbusters cartoon, that happens to have different characters and be an origin story. It seems like the actual movie has more crass humor than was in the version of the story that I read, as what I read was cleaned up for kids, and some jokes only work when seen visually. That is the part that worries me. (I don’t normally read novelizations of movies that I want to see, but I made an exception here, because I was worried about the content and wanted to see what I was getting myself into.)

On paper, the negative reaction the movie has gotten is entirely unwarranted. Frankly, the movie’s story is probably far more original than the Karate Kid remake from a few years ago. According to articles I read, that one was basically a “find and replace” of the names and locations and ages of the characters, with one extra scene added, but was otherwise the exact same movie as the original. This Ghostbusters film has a similar rhythm to the original Ghostbusters film, but can stand on it’s own. Basically, watching the two Karate Kid movies (original and remake) back to back would feel like you’re watching a fan film of the original. Watching this film back to back, or even after GB 2, you would wonder why they didn’t just team up with the original Ghostbusters, but you wouldn’t think it’s a repeat with different actors.

I’ll let you know how I really feel after I see it.Â I want to give it a shot to surprise me. It comes down to the acting, the jokes, the music, the directing and the visuals at this point. Will I want to own this movie? I hope so.

I want the movie to be awesome and for all the haters to have to eat their words. It would be amazing. But I don’t know if that is possible, because it’s not as good a story as the first film. It was, like I said, closer to The Real Ghostbusters and probably Ghostbusters 2 in story. Because it’s not as good as Ghostbusters (1984), people aren’t going to relent on the hate. I also wanted it to be good, because I’m okay with women being ghostbusters (Janine was for a little on the cartoon, and I read the comics and there were women in that before this was ever announced.) but I wanted a mixed teamÂ withÂ Bill Hader, Emma Stone, etc.