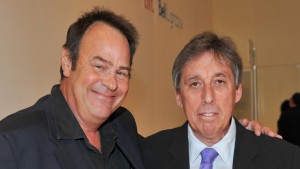 I’ve been a big fan of Ghostbusters for as long as I can remember. Director Paul Feig is currently making a movie featuring four women as Ghostbusters, and they’re shooting for a PG-13 rating (which I’m kind of worried about).Â I had been upset with the direction that the new movie was taking. Iâ€™m not against the idea of women being Ghostbusters at all. I would rather not have an entire team composed of women exclusively. Iâ€™d have been fine with any combination of men and women on the team, as has happened in the comics and cartoons over the years. I have been hoping for aÂ Ghostbusters 3 since the credits rolled onÂ Ghostbusters 2 when I saw it on the big screen as a kid. Iâ€™m never really against getting a sequel to a great movie, because if itâ€™s great thereâ€™s more to love. If itâ€™s awful, itâ€™s easily ignored. I also own more Ghostbusters collectibles than anyone probably should.

Now I have reason to hope once more. After Sony made their deal with Disneyâ€™s Marvel Studios to bring Spider-Man into the Marvel Cinematic Universe, they were left with a load of release dates from cancelled Spider-Man related projects. Everything from The Amazing Spider-Man 3 to Venom toÂ The Sinister Six, as well as a potentialÂ Black Cat movie (or another female lead Spider-Man spin-off) and a potential Aunt May film that sounded kind of like Agent Carter. It would have been interesting to see how this Spider-Man Cinematic Universe would have looked, but Marvel Studios didn’t want to over-crowd cinemas with their movies, for possibly because it could weaken the comic book movie brand considerably.

Sony took a good look at the properties they had in development, and decided that theyâ€™d finally attempt to create something they can legitimately call their own, without fear of losing it to another studio. That could have been something likeÂ Men in Black, and there are rumors about that as well.

For now, they’ve created a studio called Ghost Corps (pronounced Ghost Core), which features original Ghostbuster Dan Aykroyd andÂ Ghostbusters 1 & 2 director Ivan Reitman. Their goal is to bringÂ Ghostbusters to a larger scale, with a larger cinematic universe, television and merchandising. And it all starts with Paul Feigâ€™s movie.

After that, thereâ€™s a possible male-leadÂ Ghostbusters film that is rumored to star Channing Tatum and Chris Pratt (and I personally hope that Bill Hader and Emma Stone join that team). That film could be directed by the Russoâ€™s (Captain America: The Winter Soldier,Â Captain America: Civil War), and would probably be shot during the summer of 2016. The film currently lists Channing Tatum as a producer, with no actors attached, and the Tatum/Pratt team-up could be related to the leaked Sony e-mails from Tatum in which he wanted to make a Ghostbusters film in which he and Pratt would star.

The next film would be an Avengers style team up, to take on a larger supernatural threat. And Iâ€™ve also read that a fourth film would possibly be a prequel to all of these movies. This prequel likely would not include the surviving original Ghostbusters, because of the red tape due to the rights to the characters. However, seeing as Aykroyd and Reitman are involved, I wouldnâ€™t count that possibility out entirely.

There is also the possibility of the return of the comics, hopefully with the return of the same creative team behind the IDW line that was so excellent. It also could mean another animated series, which is something else that Iâ€™m really excited about (and another reason why I question that the use of the characters from the original movie could be much of a rights issue). IDW is currently preparing their second mini-series since the cancellation of the on-going series. Hopefully they maintain the rights to the brand well into the future, as their work has been excellent.

Sony isÂ serious enough about this that Reitman is moving his entire staff of his production banner The Montecito Picture Co. onto the studio lot to focus on this endeavor. Montecito and Ghost Corps will be separate entities, however.

â€œWe want to expand the Ghostbusters universe in ways that will include different films, TV shows, merchandise, all things that are part of modern filmed entertainment,â€ Reitman said. â€œThis is a branded entertainment, a scary supernatural premise mixed with comedy. Paul Feigâ€™s film will be the first version of that, shooting in June to come out in July 2016. Heâ€™s got four of the funniest women in the world, and there will be other surprises to come. The second film has a wonderful idea that builds on that. Drew will start writing and the hope is to be ready for the Russo Brothersâ€™ next window next summer to shoot, with the movie coming out the following year. Itâ€™s just the beginning of what I hope will be a lot of wonderful movies.Â My primary focus will be to build the Ghostbusters into the universe it always promised it might become. The original film is beloved, as is the cast, and we hope to create films we will continue to love.â€

What do you think of the idea of theÂ Ghostbusters Cinematic Universe?

tl;dr: Sony Pictures created a production company called Ghost Corps. Ivan Reitman and Dan Aykroyd are part of that company. Theyâ€™re creating a Ghostbusters Cinematic Universe starting with Paul Feigâ€™s movie. A second movie could be directed by the Russoâ€™s starring Channing Tatum and Chris Pratt, with a third film being a team-up, and a fourth being a prequel. Ghost Corps is also creating other outlets for the brand including TV and merchandise.

Ivan Reitman has been a great source of knowledge aboutÂ Ghostbusters 3. In one story he addresses all of the rumors that surrounded Bill Murray’s involvement in the third film. “There were a lot of stories […]