Oliver & Company is a movie that came out when I was really young. I slightly remember seeing it in theatres. I also had the soundtrack on an audio cassette (it feels weird typing that word). Disney had released the film on DVD before, but it wasn’t exactly a great release even though it was a “Special Edition.” On February 3, 2009, they’re going to correct that by releasing an all-new 20th Anniversary Edition DVD. 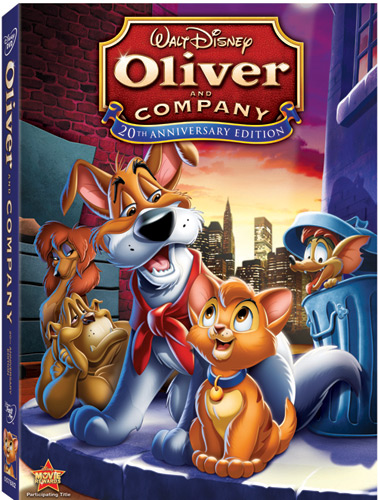 Burbank, Calif., October 17, 2008 – Fall in love with Oliver & Company’s adorable gang of animal outcasts all over again on February 3, 2009 from Walt Disney Studios Home Entertainment. Disney’s 27th full-length animated film celebrates its 20th anniversary in a special edition DVD with enough fun and laughter for the whole family. Brilliant animation, a fantastic soundtrack and the amazing voice talents of Billy Joel, Bette Midler, and Huey Lewis, put Oliver & Company on track to win the hearts of a whole new generation. The 20th Anniversary Edition comes with animated shorts, behind-the-scenes featurettes and an all-new game that the parents and kids will love to play together.

This timeless classic lights up the screen with a story of courage and heart, friendship and loyalty and a songbook filled with unforgettable tunes.

Disney presents an unforgettable musical adventure as Oliver, an adorable stray kitten (voiced by Joey Lawrence), takes Manhattan by storm! When Dodger (Billy Joel), a street-smart mutt with a weakness for mischief, befriends the homeless tabby, he introduces his new pal to his pack of pickpocket pooches, run by the nefarious Sykes (Robert Loggia). Just as Oliver is about to begin a life of crime, he is rescued by a rich girl named Jenny, who takes him home to live in luxury with her and her spoiled poodle Georgette (Bette Midler).

But when Sykes finds out about Oliver’s new benefactor, he hatches a plot to abscond with the little girl and hold her for ransom. The courageous kitty and his newfound friends must race to the rescue in an electrifying chase through the city’s labyrinthine subway system in order to bring Jenny home. Brimming with music, humor and adventure, Oliver & Company is sure to delight the entire family.

Christmas 2009 came with a new gift from Disney â€¢ Pixar: Prep & Landing.Â  This is a new holiday classic featuring a pair of elves that prepare each home for the arrival of Santa Claus.Â  […]

When I heard that Disney was making a live action version of Cinderella at the 2013 D23 Expo, I wasn’t all that impressed with the idea. I’ve never been a big fan of the character […]

Bandslam released last summer to very little fanfare.Â  In fact, the marketing of the movie was absolutely horrible.Â  Every trailer for it was worse than the last, and the film had been retitled a number […]