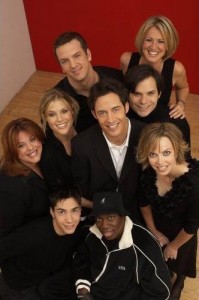 Ed is another one of those shows that is being held up because of the music that they used in the show.Â  Over the years there have been some rumors about work being done on the DVD, but lately those rumors have become increasingly pessimistic toward any sort of release at all.

While everyone seems to want The Wonder Years, that is at least available on Netflix streaming.Â  The same, unfortunately, cannot be said of Ed, which is one of the best TV shows ever made.Â  It deserves a release onto home video.

Produced by Worldwide Pants, this show features Tom Cavanagh as Ed Stevens, a contracts lawyer at a high-profile New York City firm. Around the same time he splits with his wife (she slept with a mailman), he makes a single error in punctuation when going over a contract; and because of the resulting financial loss to the firm, he’s fired. Despondent, he heads back to his (small) hometown of Stuckeyville — ‘Anytown’, USA. There he realizes he’s been missed by a lot of friends whom he’s missed; and he sees Carol (Julie Bowen), the girl he’d adored in high school. Swept up in roiling emotions, Ed buys the local bowling alley on a whim, moves to Stuckeyville, and determines to win Carol’s heart. His horizons broaden as he settles once more in Stuckeyville, and the series itself settles into a charming, funny, often serious slice-of-life series focused not solely on Ed but on the lovable ensemble cast of people who live and work with him in Stuckeyville.

If you need a reason why, watch this clip, Ed’s Decision, from a season 3 episode:

What do we know so far?

February 25, 2007 .. Collider.com published an interview with Tom Cavanagh, the star of Ed and Gray Matters, his movie with Heather Graham. A question about Ed on DVD came up…

Are we going to see Ed on DVD?

Tom Cavanagh: Yeah, I guess they’re talking about it. Last I heard was they were close on season one. The stumbling block as it’s like a lot of the time is the music rights. They were fortunate enough because of the clout they had as the Letterman’s producers to get a lot of great music as one-offs, of course when you put those on a DVD that becomes a whole different thing. I think that’s the difficulty. It would be nice; it would be helpful to have a little something to have a paper weight on the desk.

You’d come back and do commentary and stuff?

Tom Cavanagh: Gosh I don’t know. That might be the death of the DVD. I’d like to hear what the producers have to say, that’s for sure.

March 9, 2007 .. The Futon Critic interviewed Rob Burnett and Jon Berkerman from The Knights of Prosperity, and the interview started with The Futon’s Brian Ford Sullivan, a good friend to our site, asking about the Ed DVDs:

Brian Ford Sullivan: Before we start – I have to ask, who do I have to kidnap, blackmail and/or threaten to get “Ed” on DVD?

Jon Beckerman: Yeah, it’s been sort of confusing especially since everything else that’s ever been made for television seems to be on DVD now. But our understanding is that things got kind of tied up in between the different entities that were involved in producing the show. Because it was a joint production of Viacom Productions, which no longer exists, and NBC Productions and I guess Viacom kind of got absorbed back into Paramount and I don’t know, it’s just a whole maze of executives and confusion. But we’ve had a lot of requests for it come our way and so we just want copies for ourselves mostly. [Laughs.] We’d like that to happen.

Rob Burnett: I think that the real reason is that the show is so good they fear that if they put it on DVD people would die of laughter. So it’s really a precautionary measure.

February 11, 2009 .. Tom Cavanagh paid a visit to WOOD-TV8’s “Avi the TV Geek” (a.k.a. Avi Forstein) at the NBC affiliate in Grand Rapids, Michigan. In the video clip of the interview that you’ll find there, at about 32 seconds in, the TV Geek asks Cavanagh about the possibility of DVD releases for a pair of the actor’s previous television series: Ed and Love Monkey. Here’s the exchange:

TVGeek: I mean, you’re obviously not making any more residuals from Ed, so you know, you gotta find work.

TVGeek: Well, I’ve always wondered. Are they coming out with a DVD of Ed anytime soon here?

Tom Cavanagh:Â Um, that is in the works as we speak. We don’t want to, like, jam it down peoples’ throats immediately…we’re trying to wait a nice decade before we can present that to the people who want it.

Tom Cavanagh:Â You’ll probably see Love Monkey before you see Ed, but they’re both in the works. How about that?

And that was the last update on the DVD until a recent story on AV Club that mentioned Ed:

“There are still shows of relatively recent vintage that cannot be found anywhere, mainly because of obscure legal reasons. Thatâ€™s the case with Ed, the wonderful 2000-2004 NBC comedy-drama starring Tom Cavanagh as Ed, a New York lawyer who escapes to his Ohio hometown and opens a bowling alley after he gets fired from his high-powered job. He then tries to reconnect with Julie Bowen, the girl he had an unrequited crush on in high school. The show had a fun, easygoing vibe, and it introduced a bunch of quirky characters who quickly became endearingâ€”including Justin Long and Michael Ian Black in supporting roles. But as with most shows at the beginning of the era when third-party pop and rock songs were used in abundance on shows, the folks at NBC and Worldwide Pants didnâ€™t realize theyâ€™d need to secure DVD rights to all the fantastic music used in the show. Cavanagh has told reporters that there will probably never be DVDs of the series because those rights are so expensive. So the best we can do is YouTube clips, which we can watch while cursing Hollywoodâ€™s shortsightedness in the early years of the DVD era.”

So, the chances that we’ll be seeing Ed on DVD and Blu-ray any time soon are pretty slim to none, but perhaps enough people writing the studio could help persuade them to get the rights.Â  Perhaps.

The Wonder Years is coming to DVD with all music intact!

Finally, after years of waiting, hoping, and beginning to think it was never going to happen,Â The Wonder Years is coming to DVD. Â We wrote about it for one of our articles, explaining the difficulty in […]

5 Reasons I still buy Blu-ray and DVD, and will continue to

I have a decent collection of movies and television shows on Blu-ray and DVD. It’s something that most of my friends know, and they often ask me what movies are out that are worth seeing, […]