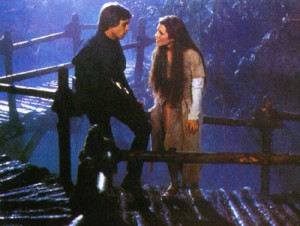 If you’ve not seen Revenge of the Sith by now, this article will be spoiler filled, so avoid if you need to.Â  However, if you’ve read my other articles, you already know all of the stuff here anyway, so read on.

There is one pretty big inconsistency in the Star Wars films that I don’t know the answer to.

How does Leia remember her mother?

It seems there are many theories about why, in Return of the Jedi, Leia says that her mother was “very beautiful. Kind, but…sad.”

The original trilogy never mentions how Padme died, which is probably why Revenge of the Sith had her die in childbirth.Â  But that doesn’t really make sense with regard to Leia’s memories of her.Â  There have been attempts to explain it, however.

In The Empire Strikes Back, two important things happen that could help to explain.Â  First, Yoda says to Luke: “Through the Force, things you will see. Other places. The future…the past…old friends long gone.”Â  Second, Leia is Force sensitive, and hears Luke when he’s calling for her help at the end of the film.Â  These two facts make it possible that she had sensed her mother, or seen visions of her in the past, and not really known the difference.

The only real downside to that explanation is Leia saying “You have a power?Â  I don’t understand,” to which Luke responds that she has it too, and that in time, she’ll learn to use it as he has.Â  Leia should have understood at least some of it.Â  But then, she didn’t really understand how Luke had called to her in The Empire Strikes Back.Â  So if she had sensed her mother through the Force as a small child, she may have thought she was seeing her mother, or just known that she was seeing her through the Force.Â  But how those visions became memories that she just recalled without question, we’ll never know.

My concept for how to resolve this is simple, and provides a solution to the entire situation.

That’s right.Â  I feel that Padme should have survived Revenge of the Sith.Â  She should have gone to Alderaan, and when she got there, given Luke to Obi-wan to hide on Tattooine.

This would help to alter the editing and dialog of the scene in which Darth Vader is first revived in his respirator suit. This scene is suddenly given much more gravity, even as currently written.

Palpatine: Lord Vader, can you hear me?

Darth Vader: [In mechanical voice] Yes, Master. Where is PadmÃ©? Is she safe? Is she alright?

Palpatine: It seems, in your anger, you killed her.

Darth Vader: I… I couldn’t have. She was alive! I felt it! [damages several surrounding objects and droids through the Force. He then breaks the clamps that have been holding him down and takes a few steps forward. Palpatine watches, grinning cruelly.] NOOOOOOOOOOOOOOOOOOOOOOO!!!!!

Instead, the conversation between Palpatine and Vader could then have been more manipulative and sinister.Â  When Palpatine says “you killed her,” Vader would have responded “No, she’s still alive, I can feel it.”Â  Palpatine could then say, “no, your feelings have betrayed you.” 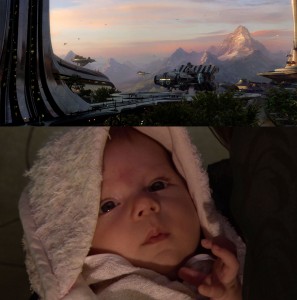 I would have had the clamps broken off by the use of the Force, and not brute force.Â  I would also have had things around the room shatter a bit.Â  Then, as Vader begins to say “NOOOOO…” it cuts to a shot of Padme, on Alderaan.Â  We continue to hear the “NOOO” as a voice-over in the background.Â  Padme tears on her cheeks, as she is holding Leia.

It does alter the order of events for the end of the film, as well as some of the conversations that some of the characters have, but not all that much.Â  Bail Organa and his wife could take Padme in, with the newborn Leia, informing her that her identity would need to be changed to keep her safe.

The one thing it wouldn’t cover would be how Padme eventually dies, because she clearly isn’t around at all for the original trilogy.Â  This would be one of the mysteries that would go unanswered, that fans would speculate about until it was written about in books that take place between Episodes III and IV.Â  This is also one of the mysteries that the prequel trilogy needed to leave us with.

The scoundrel.Â  The smuggler.Â  The over-confident anti-hero.Â  Han Solo and Lando Calrissian are two characters from the original trilogy that helped to make the Star Wars universe what it is today.Â  They were the characters […]