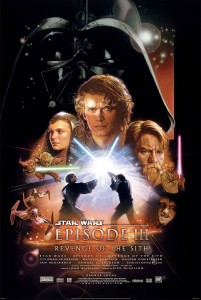 Time for a general entry. Not to say that this will be a boring entry by any means. I was having a conversation with my friend Deb, when I realized something simple, yet profound.

I know what it is about Star Wars that made me like it more, and makes me love it. My mom once told me that my Grandpa loved Star Wars, and loved talking about the spiritual elements of the films, and how much fun it would have been, talking to him about the new ones. She also said that he would have LOVED talking to me about the Lord of the Rings.

My Grandpa was a convert to the Catholic Church, a Father of nine, and the Doctor for a small town. He passed on when I was 12.

Somehow, I feel a connection to him, through Star Wars. I realize now, that is why I defend the prequels, and part of why I enjoy them. I look beyond the surface, of what people would consider a “bad” movie, to the things that I think my Grandpa and I would have talked about. We would have had some mighty good discussions about both of the new films.

Now with the third film coming out, people are scared that they’ll be let down, again. I’ve got no fears about this film. While Episode I is a flawed film, it’s not without its’ moments. The same goes for Episode II. I’ve felt they could have covered the material of Episodes I and II in film one, the clone wars in film two, and the third film to be, well, pretty much what it is: The purging of the Jedi, the rise of the Empire, and the birth of Darth Vader.

I’ve got here, two review samples. The first, is of the Novelization of Star Wars: Revenge of the Sith, by a man named LargeFarva, on FilmRot.com:

At least, in print, it does appear that the movie will tie together all of the plot threads successfully. The major issues most fans have speculated and dared Lucas to explain are included in the novelization, from Qui-Gon Jinn’s non-disappearance, to Kenobi’s claims that Yoda was his master. There is even strong evidence that a few characters in the original trilogy knew quite more than they let on, and with plenty good reason. Also, it is true that the first character to speak in the original trilogy has the last line of the prequels. Finally, after reading the epilogue, I’m finding it hard to continue laughing at Lucas’ claims that Sith is “a real tear-jerker”.

I’ve read the other novelizations and this is by FAR the best, the one we’ve been waiting for since the announcement of the prequels.

This is very promising news. Another review, is of the Screenplay, now available as an ebook, by Bill Hunt, Editor of TheDigitalBits.com:

I have to tell you that I was awfully uneasy as I began reading the script. The first third of Revenge of the Sith feels very much like parts of The Phantom Menace… and I don’t mean the good parts. There’s a lot of Anakin and Obi Wan bantering back and fourth as they fight scores of battle droids, and the dialogue is pretty bad. BUT don’t despair, because once you get past this, the film gets a lot better. About a third of the way in, the Sith lord’s nefarious plot really starts unfolding… and it’s all dark and intense action from there on out. The script finishes well, setting up A New Hope beautifully. There are a couple of great surprises, and the plot threads all tie up nicely. You’re going to be left with a strong sense of “Wow… so THAT’S how it all happened.” I’ve heard from people who have seen most of the film that the action and visuals are astonishing – the best yet from Lucas. Add to that John William’s final score, which you KNOW is going to kick ass, and I think the vast majority of Star Wars fans will enjoy this film. If Lucas pulls it off, it’ll easily be the best of the three prequels. Whatever you think of them so far, there’s nothing like a strong finish. When I get the chance to SEE this film, you can be sure that I’ll post a review.

Both of those reviews sum up pretty much all I know about the movie, save for the footage I’ve seen in the trailers, commercials, and some of the music I’ve heard on the official site, StarWars.com. And from what I know, we’re in for a real treat.

Go into this movie expecting it to be just what it was meant to be. Entertainment and the origin of Darth Vader. This is how it happened folks.

I’m not looking for comments on this post to talk about whether or not you’ve seen Star Wars, or if you think the prequels suck, or that this one will suck. Any comments like that will be deleted, no questions asked.

I want to give this last Star Wars film a shot at being a great film, and to expect anything less from it, would be contrary to what it very well could be. The third film of any trilogy should justify the first two. However, this film isn’t meant to end the story, it’s to set the stage for the beginning of the original trilogy, and to build the arc that puts Darth Vader right where he’s always been: the main character and centerpiece of all six Star Wars films. The Fall and Redemption of Anakin Skywalker. Redemption is the theme, folks, but redemption from what?

“Do what must be done, Lord Vader. Do not hesitate, show no mercy.”

We talk about forgiveness a lot, and it is one of the hardest things to ask for, and the hardest things to do for others. This story is about one man who fell, and for years walked a dark path, and finds forgiveness in people that weren’t even there when he fell. That is a testament of how we should live our lives for others. Forgiving everyone, everything, NOW! Not WASTING TIME holding onto hatred or anger. There’s just no point. Save the anger for true evils.

This month, I’ll be seeing Transformers 2 a few more times. But in between visits with Optimus Prime, Bumblebee and the gang, I’ll be seeing Ice Age 3: Dawn of the Dinosaurs, Harry Potter 6 […]