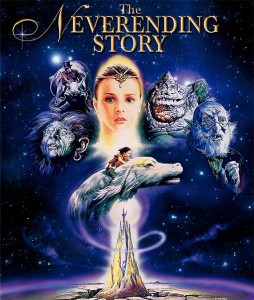 I suppose it was inevitable. I just didn’t expect it. I don’t know why I didn’t see this coming, but I should have. One of my favorite movies to watch when I was young was The NeverEnding Story. Now it’s in a stage where a remake is going to happen. It was just a matter of time.

If you’ve been keeping up with this blog, you know that I despise the Karate Kid remake and I am excited at the potential for Ghostbusters 3. But when it comes to this film series, I only loved the first one. The second one was okay. I thought it was good, but not great. The third one, a straight to home video film that I can barely remember… let’s just say it’s good that they’re doing a new film instead of just trying to do a NeverEnding Story 4.

One of the original film’s producers is on board to produce the new one, along side Frank Marshall and Kathleen Kennedy.

I just hope that they keep the original theme song. At the very least. It’s a song that captured the adventure and the mystery of the story.

I’m pretty excited to see a spectacular looking Falcor, though. I think that it could become a much better film, in the long run.

It was also based on a German book, which the movie only covered about half of. I only was able to get through a little more than half of the book when I tried to read it. I had just read Tolkien, and the writing in this one was nothing compared to Tolkien. It was insanely boring in parts, and that was sad to me.

However, I’m willing to give this remake a shot. I hope that it goes well, and I look forward to seeing it.

So, not only are they destroying the classic film The Karate Kid by making a remake of the original.  They’re also ruining the character of Mr. Miyagi with the casting of Jackie Chan in the […]

Disney Remaking Flight of the Navigator!

Wow… this is something that I actually saw coming at some point in the near future, and it’s one that I’m actually happy about. I was a pretty big fan of the original version of the […]

The Karate Kid Remake with Jaden Smith? No Thanks!

So, news has hit the web today that a deal has been made to remake The Karate Kid. Not only that, but it will be set in middle-school. But that’s not all. It will be […]