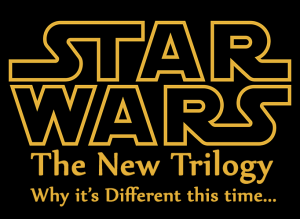 Since the Star Wars prequels, many things have been said about the state of Star Wars and the fandom.Â  And that includes a massive hours-long rant by a fan that people claim to be the definitive answer to George Lucas’ prequel trilogy.Â  To that particular individual I say, “eh, get over it.”Â  At this point, it’s all moot anyway.

Many things have been said about the new Star Wars trilogy, but I’ve not yet read anything that talks about why this isn’t going to be another prequel trilogy repeat.Â  The reason why it’s different from the prequels will surprise you, because it has nothing to do with the quality of the films, and everything to do with the story.

It comes down to this: we don’t know what is going to happen next.Â  The sense of discovery that we had with the Original Trilogy unfolding before us will be present.

That was the one (gigantic) missing piece from the prequel trilogy.Â  We knew what was going to happen in those movies, even if we didn’t know all the details.Â  We just wanted to see how everything happened.Â  In fact, Episode III had everything that we wanted to see for the entire prequel trilogy: clone wars, Darth Vader hunting the Jedi, the Jedi purge, Anakin (by then Darth Vader) vs. Obi-Wan Kenobi, the birth of Luke and Leia, etc.Â  But we knew all of that.

This time, while there’s a horizon to reach, we don’t know where the horizon line is.Â  We don’t know if everyone will survive.Â  We know nothing about where the story will take place, or when it will be set.Â  This makes it all the more exciting, as we go from Episode VII, which will introduce the characters, story arc, and journey that we’ll be following through the trilogy.Â  We’ll also be introduced to a new threat to the galaxy, or possibly the remnants of the Empire will rise up in an attempt to reclaim their former glory.Â  It will be very interesting to see how that proceeds, as currently there are no Sith Lords left in the film universe.

This time, we get to discover the story as it unfolds, instead of waiting to see Obi-Wan’s words from 1977’s Star Wars: A New Hope come to life.

We know that it’s not based on any of the Expanded Universe material that has been released since 1991’s Heir to the Empire, though, which has implications of it’s own concerning all of those stories, but I’ll leave that for another entry.

We also know that George Lucas wrote the outline and that Mark Hamill, Harrison Ford and Carrie Fisher are possibly going to reprise their roles from the original trilogy.

But that’s it.Â  And that is exciting.Â  We have nothing to go from, no pre-imagined pages from a book that a purist will complain about to anyone that will listen, just pure, new, Star Wars.Â  And it’s about time we get something like this in more than just book form.Â  For the first time in a generation, we truly have our chance to see a new Star Wars trilogy, for the very first time.

A few months ago I had an idea that, while imperfect, could have resulted in a much better response to The Phantom Menace.Â  Would the movie play better if every Neimoidian character was replaced with […]

A Mighty Wind is a fine and funny movie. It’s really impressive that the whole thing is improved. The Shawshank Redemption should be available on DVD this year, but hasn’t been announced yet, as far […]