Reading comics is always a double-edged sword.Â  When I was a teenager I recognized the ridiculous nature of the artwork with regard to the women as artists draw them.Â  I also recognize that they’re drawings.Â  That doesn’t mean that for some they won’t be something of a challenge, though.Â  Well, last week a new design was announced for Wonder Woman.Â  It’s not the first time her costume has been redesigned, but it is the most drastic.Â  The thing about it, though, is that it’s both realistic and functional.Â  It’s also far more modest than anything that she’s worn in the past, outside of an all white full body costume at some point that I’d never seen before.Â  I only wish that it had gone further with the modesty, but such is life. 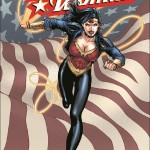 Now, let me just say that I’ve never been that big of a fan of Wonder Woman.Â  The character is one that I only knew about because when I was young I’d watch Super Friends.Â  When the FX network was kicking off, they would show the old Batman show, followed by The Green Hornet, and I seem to remember watching the old Wonder Woman tv series there as well.

I also read some JLA and saw her again in the Justice League cartoon.Â  Otherwise, I really had no interest in the character.

That being said, I think that the new costume is the right direction for DC Comics to take her.Â  It’s something that adds a big more strength to her character and will earn her more respect.

The only strange thing about it is that she’s got a small jacket as part of it, which Jim Lee also used for the X-Men character Rogue when he redesigned her in the 90s.Â  The odd thing, though, is that it adds something intangible to the character that I just can’t put my finger on.

I also think it’s more feature film friendly than her previous costume.Â  This one would actually work on the big screen.Â  We’ll have to see if it sticks and how long.Â  Lately it seems that character costumes are becoming as much a part of their mythos as the character themselves, and if they change, it’s not too much in an odd direction (unlike the Electric Superman from the mid-90s).Â  Will this costume last, though?Â  That’s up to sales of the series with this new costume, I suppose, as well as fan reaction.

It’s got my vote, and I don’t read it.Â  I’d much rather an issue of Justice League have this new costume on it, though, than her older costume.Â  Frankly, I think this change will be more striking when seen next to Batman and Superman.

Starting with their story in WONDER WOMAN #600, which is in comic shops today, JMS and Kramer will begin a run that is both forward-looking and true to the legendary character, planting her firmly in the modern era. But enough about what I have to say. Mr. Straczynski took some time out of his schedule to lay out some of his plans for WONDER WOMAN right here on The Source. So, without further adieu, take it away, Joe:

Suppose you woke up one morning, or turned a corner, and suddenly the life you had been leading up to that momentâ€¦was not the life you were leading.

Suppose someone went back in time and changed one thing, and it changed your life to the point that you had little or no memory of what life had been like before the change happened. What would you do to get it back? Should you get it back? Who did it? And maybe more importantâ€¦why did they do it?

That is the question faced by Diana starting in issue 600.

The Gods, for reasons of their own but which may have something to with their survival and perhaps the survival of Earth itself, have changed the timeline. In the new timeline, years ago the Gods removed their protection from Paradise Island, and left it vulnerable to attack. And attacked it was. Led by a dark figure, a veritable army descended upon the Island, equipped with weapons that could kill even the Amazons. Outgunned, doomed, Hippolyta gave over her three-year-old daughter to a handful of guardians who spirited her away as Hippolyta led one last desperate battle against the forces that had come to destroy all she had created. In that final battle, she and most of the Amazons were killed, though some managed to escape.

Itâ€™s now nearly twenty years later. Diana has been raised in an urban setting, but with a foot in both worlds. She has little or no memory of the other timeline. She knows only what sheâ€™s been told by those who raised her On the run, hunted, she must try to survive, help the other refugee Amazons escape the army that is still after them, discover who destroyed Paradise Island and whyâ€¦and if the timeline can be corrected or not. She also does not yet have access to her full powers, but will be gaining them as she goes. Along the way, she will face a range of enemies â€” human and otherwise â€” who we have not seen before.

What we also havenâ€™t seen before is her new look, the first significant change in her appearance since the character debuted in 1941 (not counting the mod look used briefly in the sixties, about which the less said the better). It reflects her origins in both the outside world and the world of Amazons: tough, elegantâ€¦a street-fighterâ€™s look which also incorporates elements of her classic design. It reflects the two sides warring for ultimate victory, and underscores the path she must take.

Itâ€™s a look designed to be taken seriously as a warrior, in partial answer to the many female fans over the years whoâ€™ve asked, â€œhow does she fight in that thing without all her parts falling out?â€) She can close it up to pass unnoticedâ€¦open it for the freedom to fightâ€¦lose the jacket or keep it onâ€¦it has pockets (the other fan question, â€œwhere does she carry anything in that outfit?â€, it can be accessorizedâ€¦itâ€™s a Wonder Woman look designed for the 21st century. The bracelets are still there, but made more colorful, tied on the inside and over the hand, with a script W on each of them that form WW when she holds them side by sideâ€¦and if you get hit by one of them, it leaves a W mark. This is a Wonder Woman who signs her workâ€¦letting her enemies know that sheâ€™s getting closer.

This is Wonder Woman reborn, literally and metaphorically: fast, elegant, tough, smartâ€¦the savior of her people, their guardian and protectorâ€¦avenging the fall of Paradise Island, searching to discover why Paradise Island was abandoned by the gods. In the end, what she discovers will change her life and the world foreverâ€¦and she will come face to face with a decision that will mean life or death for the entire human race.

Check out this gallery of images below to see images of Wonder Woman through the ages as well as Jim Lee’s very similar design of Rogue, with a Jacket.Â  That version of Rogue is likely one of the most popular, as it was the one seen on screen in the animated X-Men cartoon of the 90s.

Pretty late posting this list, but I felt it was time. Star Wars: The Last Jedi tops my list for 2017. It’s one of my favorite Star Wars movies, and I’ve really enjoyed the storyline […]

The X-Men films have, to say the least, been a mixed bag. When Bryan Singer’s X-Men premiered, it was unlike anything that the world had seen or expected of a filmed version of the comic […]