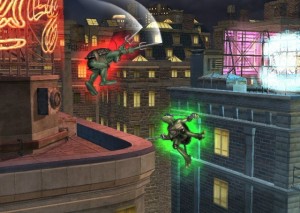 What a day. It’s been a long and arduous day, but I did manage to find this really great looking trailer for the TMNT fighting game coming out this fall for Wii.  This isn’t just a rehash of the old TMNT: Tournament Fighters game that was released on the SNES all those years ago. This is from a creative team that worked on Super Smash Brothers Brawl. Now, the trailer that has surfaced isn’t as action packed as I would have liked, when it comes to the fighting; but the graphics and the feel of the gameplay are about right.

I’d rather have a table of characters like the one in Smash Brothers, but I suppose this will do. Take a look at the trailer after the break, as well as screenshots.