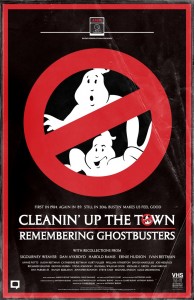 I’ve been following thisÂ Ghostbusters documentary for eight years. Now it’s closer than ever to completion, but it needs your help. The filmmakers have spent the last eight years making several trips to the United States from their homes in England, interviewing over 70 members of the cast and crews ofÂ Ghostbusters andÂ Ghostbusters II, and have some conversations about the cartoons and video game as well that could become something more substantial than a small feature if enough funds are raised.

If you’re a fan ofÂ Ghostbusters at all, please consider supporting this Kickstarter campaign.

Cleanin’ Up the Town: Remembering Ghostbusters has the potential to beÂ the essential behind the scenes documentary about bothÂ Ghostbusters andÂ Ghostbusters II. They have enough content for a director’s cut that would run for more than four hours, and that’s with just the interviews about the feature films. That doesn’t include the animated series or the video game.

Anthony and Claire Bueno have been working on this as a labor of love, self financing until now. Check out the Kickstarter trailer and consider helping make this a reality.