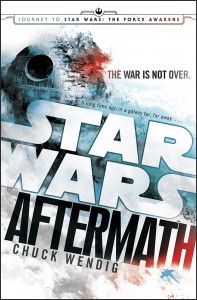 Aftermath, a Star Wars novel set afterÂ Return of the Jedi, was written by Chuck Wendig. It will be released on September 4th, 2015, just over three months beforeÂ Star Wars: The Force Awakens releases to theaters.

If you’ve been curious about what happened after the Battle of Endor, especially since the Expanded Universe has been retconned, this is a book that you’ll want to read. And this is the new canon in the Star Wars universe.

The second Death Star has been destroyed. Rumors are flying that the Emperor and his enforcer, Darth Vader, are dead. A new government is forming to replace the Empire. But the galaxy is a big place, and the fallout of this cataclysm will affect different worlds in different ways. Does everyone accept the fall of Imperial rule? Has everyone even heard the life-altering news? What rushes in to fill the vacuum the Empire has left? And who will try to stop them?

Journey to The Force Awakens.

The second Death Star is destroyed. The Emperor and his powerful enforcer, Darth Vader, are rumored to be dead. The Galactic Empire is in chaos.

Across the galaxy, some systems celebrate, while in others Imperial factions tighten their grip. Optimism and fear reign side by side.

And while the Rebel Alliance engages the fractured forces of the Empire, a lone Rebel scout uncovers a secret Imperial meeting. . . .