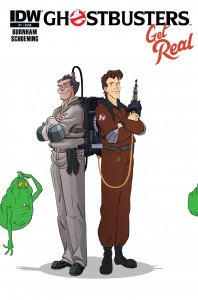 Since the end of the on-goingÂ Ghostbusters comic book from IDW, they’ve been keeping things going a bit with mini-series. It started pretty much immediately with their four part team up:Â Teenage Mutant Ninja Turtles / Ghostbusters. There had been nothing new since then, but now we have another mini-series coming that will bring the team together withÂ The Real Ghostbusters.

Ghostbusters Gets Real is expected to ship in June.

I’ve been a big fan of Ghostbusters for as long as I can remember. Director Paul Feig is currently making a movie featuring four women as Ghostbusters, and they’re shooting for a PG-13 rating (which […]