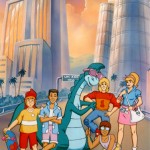 Do you remember the cartoon series Denver the Last Dinosaur?Â  This was a show that I used to watch when I was younger, about a group of teenagers that found a dinosaur egg that hatched, and the dinosaur that came from it became their friend and they had many adventures with him.Â  The show was highly acclaimed as being a very educational series as well.

World Events Productions, the company that holds the rights to this and Voltron, as well as created this series is currently at work on a new series as well as a potential film version.Â  They’re doing the same with Voltron, with Voltron: Panthera Force (now under the production title: Voltron Force) premiering this fall, and a live-action movie in active development.Â  It should have come as no surprise that they would also be interested in exploring a rejuvenation of another one of their properties.Â  Especially considering that the original series was recommended by the National Education Association for its engaging, non-violent storylines.

There is no word on how far along the production is, and when they plan to have the show on the air.Â  I’m curious to find out more about this one, though, as I remember really enjoying the original.Â  I’ve always been a fan of dinosaurs, and this really fed into that enjoyment.Â  I also wanted my own pet dinosaur, so the show was kind of like wish-fulfillment in a way.

One things for sure, the show was very much a product of its’ age.Â  The teens in the series dressed for the era, as well as spoke with the slang or had the hair cuts that were popular in the late 1980s.

One thing that would be really interesting would be to have the characters from the original show now be cameos of parents of the new ones on the new version of the cartoon, depending on how they plan on handling it.Â  It would be really cool to bring them into the show, though, as it would bring a cool parenting element to the stories and they could help out when the new Denver is in trouble.Â  It opens up a whole new educational paradigm for the series, while allowing it to keep in the spirit of the original.

World Events Productions also has the rights to the lesser known series: Saber Rider: The Star Sheriff and Vytor: The Starfire Champion.Â  I’m not sure if they’ll do more with those properties, though, as not many still remember those as fondly as people remember Voltron and Denver: The Last Dinosaur.Â  I’ll keep tabs on this, though, and see what I can find out.Â  Perhaps WEP will contact me about the series, though I doubt it.

At its 2010 annual upfront presentation which featured top talent across the worlds of television, music and film, Nickelodeon today announced a slate of new programming that will be added to the network’s 2010-11 schedule.Â  […]

You are Raoul! What Phantom of the Opera Character are you? *Movie Version* brought to you by Quizilla More from my siteOn Movie Theater Etiquette – How to be a Good Cinema CitizenNew Denver the […]